TEHRAN(defapress)– The Spokesperson for the United States Department of State confirmed on Tuesday that Iranian President Hassan Rouhani had turned down US President Donald Trump's demand to meet on the sidelines of the 72nd UN General Assembly in September.
News ID: 66793 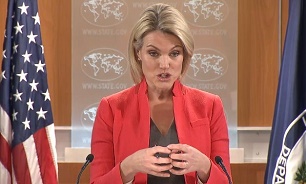 Heather Nauert evaded identifying the US specific official who would attend the meeting or if it would have been Trump himself. She said not more than "They did turn down a meeting with US officials.”

Foreign Ministry Spokesman Bahram Qasemi said on Sunday that US President Donald Trump had called for a meeting with his Iranian counterpart Hassan Rouhani while during the United Nations General Assembly session but the the call was rejected by President Rouhani.

"The American side expressed such willingness but it was not accepted by President Rouhani,” Qasemi said.

However, Ghasemi denied earlier reports that French President Emmanuel Macron had been prepared to mediate a meeting between the two presidents.