Donald Trump Responds to Manhattan Attack: 'Not in the USA!' 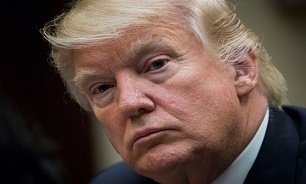 Trump, whom the White House previously said was being briefed on the situation by chief of staff John Kelly, wrote: "In NYC, looks like another attack by a very sick and deranged person. Law enforcement is following this closely. NOT IN THE USA.”

The tweet came roughly 30 minutes after first lady Melania Trump responded to the attack on Twitter by saying: "My heart breaks for #NYC today. Thoughts & prayers as we monitor the situation.”

Trump later tweeted: "We must not allow ISIS (also known as daesh) to return, or enter, our country after defeating them in the Middle East and elsewhere. Enough!”

The suspect was identified by US media as Sayfullo Saipov, an Uzbek national who entered the United States in 2010. Although there is an ISIS presence in Uzbekistan, it is not one of the countries subject to Trump’s controversial travel ban, the Guardian reported.

Roughly 90 minutes after Trump’s first tweet on the attack, he expressed his condolences to the victims. "My thoughts, condolences and prayers to the victims and families of the New York City terrorist attack. God and your country are with you!” Trump said on Twitter.

At a press briefing, New York City mayor Bill de Blasio and New York governor Andrew Cuomo condemned the attack as an act of terrorism but urged New Yorkers not to be afraid of further attacks.

De Blasio told reporters: "The bottom line is we are going to go about our business. We are not going to be deterred.”

Cuomo echoed him in more vigorous terms, saying: "We go forward together. And we go forward stronger than ever. We’re not going to let them win.”

In Washington, Senate minority leader Chuck Schumer issued a statement after being briefed by the FBI about the attack. The New York Democrat said: "First and foremost, our thoughts are with the victims and their families. As one of thousands of New Yorkers who regularly rides on the path where this attack took place, I’m particularly grateful to the NYPD and first responders who work day in and day out to keep us safe, and to those that responded to the scene today.

"As the investigation unfolds, it’s critical that we learn what we can from this incident and do everything we can to prevent this from happening again. The scourge of terrorism is unfortunately still with us, and we must remain vigilant as ever.”

Schumer’s words of support were echoed by Speaker Paul Ryan, who tweeted: "Our hearts are with the victims of this apparent act of terror in New York City. Thank you to all the first responders.”