TEHRAN (defapress) – A top Iranian cleric condemned the US administration’s recent decision to recognize al-Quds (Jerusalem) as the capital of the Israeli regime and called on all Muslims around the world to unite against Washington’s move.
News ID: 67362 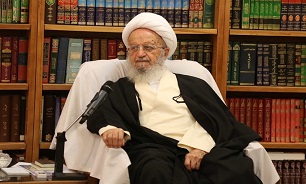 In a statement released on Saturday, Ayatollah Nasser Makarem Shirazi decried US President Donald Trump’s decision to relocate the US embassy from Tel Aviv to Quds and said the move is in violation of the United Nations Security Council’s resolutions and all international regulations.

It has sparked a huge wave of hate and protest around the world, the statement read, adding that all Muslims and many freedom-seeking nations and political figures around the globe have strongly condemned the move.

"In this situation, all Muslims worldwide should unite because Quds is a ring that connects all of them,” the cleric said, adding that Muslims should stand against this act of aggression.

Trump officially declared the disputed city of al-Quds Israel's capital, despite warnings from around the world that the measure risks triggering a fresh wave of violence in the Middle East.