TEHRAN (defapress) – Chief of Staff of the Armed Forces Maj. Gen. Bagheri congratulated the Resistance Front on recent victories in Iraq and Syria, saying “these victories brought security to the region.”
News ID: 67399 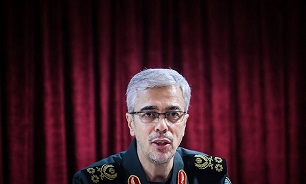 Maj. Gen. Mohammad Bagheri made the remarks at International Conference on Regional Security Order in the West Africa in the Tehran which is held in commemoration of the memory of Imam Khomeini and the Holy Defense martyrs.

"The West Asia region is considered one of the world's top ten geopolitical regions and is considered to be the most important region in the world," Bagheri said adding “after World War II, there were three Soviet-American strategic fronts, including Southwest Asia, in which the Arab-Israeli wars took place,” Bagheri pointed out.