TEHRAN (defapress) – Chairman of the Iranian Parliament's National Security and Foreign Policy Commission Alaeddin Boroujerdi said a recent decision by US President Donald Trump to recognize al-Quds (Jerusalem) as the capital of the Israeli regime boosted unity in the Muslim world.
News ID: 67402 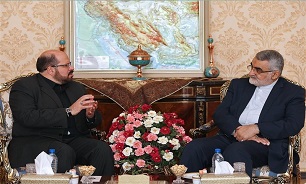 Speaking at a Sunday meeting with the representative of the Palestinian Islamic Resistance Movement (Hamas) in Tehran, Khaled Qadoumi, Boroujerdi described the Palestinian issue as the most important topic of the Islamic world.

He further expressed deep sorrow over Trump’s move to declare Quds the capital of Israel and said the measure was in violation of United Nations resolutions.

The Iranian parliamentarian at the same time pointed to the positive effect of the US move and said it has also led to the convergence of the Muslim world.

Qadoumi, for his part, emphasized that Trump’s decision on Quds has created a dangerous situation for the Palestinian people and jeopardized world security.

The remarks came after Trump officially declared the disputed city of al-Quds Israel's capital, despite warnings from around the world that the measure risks triggering a fresh wave of violence in the Middle East.

Israel has occupied East Jerusalem since the 1967 Middle East war. It annexed the area in 1980 and sees it as its exclusive domain. Under international law, the area is considered to be occupied territory.a