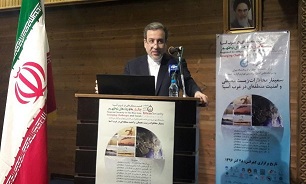 Deputy Foreign Minister Abbas Araghchi addressed the Seminar of Environmental Risks and Regional Security in West Asia in Tehran on Tuesday, adding “the water problem and other environmental threats in the West Asian region must be looked at within a security framework, and become a pressing point for diplomacy.”

He also called on West Asian countries to move toward smart trade, as well as smart imports and exports.

“Water in West Asia has now become a strategic commodity and needs a strategic approach as well,” he stressed.

85 percent of the West Asia region is arid  and semi-arid; in 1955, three countries of the region were considered as drylands; in 1999, the number of drylands reached 12, and by 2025, other countries, including Iran, will be added to the list, which in effect, will make the West Asian region officially recognized as an arid area, according to international standards and criteria, Araghchi said.

According to Araghchi, Iran's water consumption is 70% higher than global standards, and this includes other countries in the region, as well.

Araghchi went on to add, however, that international experiences show that water shortage and financial issues have a tendency to lead to further cooperation among countries rather than to conflict and war in the world.

The Seminar of Environmental Risks and Regional Security in West Asia, which kicked off in the Iranian capital on Tuesday, is in line with a series of seminars hosted by Tehran, leading up to Tehran Security Conference in 2018.

The mission of Tehran Security Conference is to promote dialogue as well as mutual confidence and cooperation among West Asia countries in order to achieve collective security and progress.