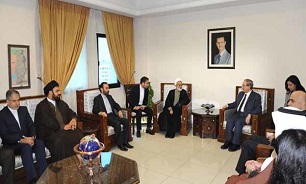 In his meeting with the visiting Iranian parliamentary delegation to Damascus on Thursday night, he placed special emphasis on the participation of Iranian companies in economic activities and reconstruction projects of Syria.

Syrian Prime Minister expressed his special thanks to the unsparing support of the Iranian government and people from Syria in fighting against terrorism and termed the victories in Syria as a great achievement for the resistance movement.

Under the wise leadership of the Islamic Revolution, the noble nation of Islamic Iran has always managed to thwart conspiracies of enemies in the best form possible, Khamis reiterated.

He considered the recent riots in Iran as the result of provocative moves taken by US and Zionist regime and their protégé in the region.

In conclusion, Syrian Prime Minister Khamis condemned Iran’s recent riots which is the brainchild of Iran’s position in supporting rights of the oppressed nations and Palestine in particular.

For their parts, Abdol-Reza Ghassemian 1st Charge d’Affaires of the Iranian Embassy to Syria and Hojjatoleslam Ahmad Salek Chairman of Iranian Parliamentary Delegation emphasized the significance of strengthening relations between the two countries of Iran and Syria in all fields.

The Vice Chairman of Iran and Syrian Parliamentary Friendship Group congratulated the noble nation of Syria for the recent victories of Syrian army and its allies in various parts of this country and linked it with the recent events in Iran in announcing al-Quds (Jerusalem) as the capital of Palestine.