TEHRAN (defapress) – The Chief of Staff of Iranian Armed Forces Major General Mohammad Hossein Bagheri offered condolences to the families of the crew of the Iranian oil tanker Sanchi bursting into flames from end to end and sinking off China’s coast.
News ID: 68088 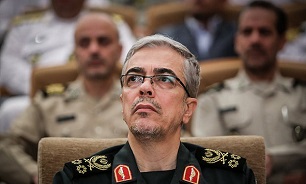 In a message of condolences over the death of sailors on board the Iranian oil tanker, Bagheri expressed great grief over the loss of 32 crew members of Iran's Sanchi oil tanker.

"The calamitous and regrettable incident involving an Iranian oil tanker bursting into flames and sinking off China’s coast and the brave sailors who lost their lives during mission caused great sorrow and pain among the Iranian nation," the message reads.

The Sanchi oil tanker, carrying 136,000 tonnes of condensate from Iran to South Korea, caught fire on January 6 after it collided with the CF Crystal, a Hong Kong-registered bulk freighter, about 160 nautical miles (184 km) off China's coast near Shanghai. Thirty two crew members were on board, comprising 30 Iranians and two Bangladeshis. A Chinese salvage team on Saturday recovered two bodies from the tanker. Another body, presumed to be one of the Sanchi's sailors, was found on Monday and brought to Shanghai for identification.

The Iranian Cabinet declared Monday, January 15, as a nationwide day of public mourning over the tanker disaster.