The martyr Nabi-lou‘s wife says: "We saved each other's name on the phone My calmness, because he believed that when we saw this name, it will be queen of our minds .
News ID: 68136 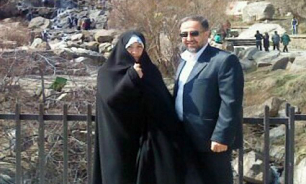 According to the epic and jihad group of DefaPress : Martyr Nabilou was born in 1345 and was a sainthood warrior who was martyred at the fourth stage of his deployment to Syria. He was a martyr defender of the Mashhad Askari shrine. In the following, read the short narrations of the martyr's wife.

Massoud was a cousin, and we were both interested in getting together for almost five years before marriage, despite the kinship we did not have any interest in each other. For this reason, he always said: "The love that lies between us is the result of the vexation and unity of time, and that we have not allowed Satan to come to this love." Al-Hamdullah During our years of being together, our love and affection We were talking to friends and acquaintances, so when they went to Syria, they were all asked how we were satisfied with this separation. Although we had a very uplifting life, we never lost much of our interest.

During the common life, we were the days when we were struggling with difficulties and difficulties, but we never allowed anyone to know about it except ourselves, never our differences and grudges and grievances It was not drawn up and was always solved by talking and reasoning, a problem that is less common in modern life.

We saved each other's name on the "calm of my soul" phone, because it believed that when we saw this name, the queen of our minds is that we are calm.

I did not merit to martyrdom

He never sought to determine the percentage of devastation. Until three years after the war, and at the insistence of the administration, it received 15 percent of the injuries, which was also to cover the cost of its wartime medical treatment. Otherwise, when he took all his teeth, he put them back on his gums again. For only 23 months, he only fed water and water through the tubes, there were several rubbish in his hands and feet some of which were annoying.

The first time he went to Syria, he fell from his abode. He cut his stomach 30 centimeters and acted. His right ear had lost his hearing. His right hand was full of burns. This situation made him very upset because he said that I was not worthy of testifying because everyone else was in my position as a martyr. Later we realized that God wanted to give us the opportunity to prepare and make he martyr.

Write on the stones: Protecting the privacy of the province
The martyr's characteristic features were goodness, kindness and morale and sacrifice. He had a great insight and was fully aware of the political issues of the day. From other characteristics of his character, he was the provincial governor, as he ordered to be written on his stone: "The martyr defender of the province." He said: do not tell us the "protector of the shrine", because the harms are now safe. We are the "founders of the emergence" and wherever we need to defend, we are here to prepare the conditions for the advent of the Imam (AS).

I did not like to die with natural death

Very popular and hospitable. Before his martyrdom, I continuously defined my morals and always told my kids: "I live with an angel." And he really was like an angel.

Perhaps it is hard to believe this, but in the best moments of our life, we were crying to him: "I do not like to die of natural death" and it was a question to me why he did not martyr during the war? And I also said to him, because he really deserved his testimony and the future showed it.