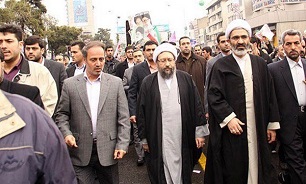 "People displayed the country's national might again by their mass-participation in the February 11 rallies and this presence is the firm response to the prates of the enemies who want to stir differences among people," Amoli Larijani told reporters in Tehran on Sunday on the sidelines of the February 11 rallies to mark the 39th anniversary of the victory of Islamic Revolution in Iran in 1979.

He said that hostilities shown against Iran by the enemies, specially the US and its allies, are due to the country's might.

The Iranian people participating in the February 11 rallies to commemorate the 39th anniversary of the victory of Islamic Revolution reiterated in a final communique that they still see the US as their arch foe nearly four decades after the 1979 Revolution.

"We consider the criminal US as our number one enemy and voice anger and hatred for the great Satan's disloyalty and violation of the contents of the (2015) nuclear deal and condemn the hostile positions of certain high-ranking European officials who accompany the great Satan's hegemonic policies and we call on all Islamic Republic officials and authorities to take firm positions and bravely act to fully restore the national rights and interests and effectively reciprocate the sanctions and sabotage acts of the hegemonic system and its agents," a statement issued by ralliers after the end of the Sunday rallies said.

The Iranian people also reiterated their allegiance to the Islamic Republic and Supreme Leader of the Islamic Revolution Ayatollah Seyed Ali Khamenei, and underlined firm support for the country's deterrent defensive and missile industries.

They, meantime, called on the government to double efforts to improve economic conditions of the country and provide the people's needs.

The Iranian ralliers also stressed all-out support for the Islamic world's unity and resistance, specially in Palestine, and condemned the US recognition of Jerusalem al-Quds as the capital of Israel as well as the Saudi crimes in Yemen and Bahrain.

They also underlined the necessity for the Iranian authorities to block enemies' attempts to infiltrate in the country and weaken Iran's power and clout in the region and the world.

Iranian people from all walks of life took to the streets all over the country on Sunday morning to celebrate the 39th anniversary of the victory of the Islamic Revolution in a show of continued support for their revolutionary causes and the Islamic establishment.

Millions of Iranians took to the streets today to commemorate the 39th anniversary of the Islamic Revolution in demonstrations across the country.

Some 6,000 domestic and foreign reporters are said to be covering the Bahman 22 (February 11) rallies.

In Tehran, demonstrators converged at the Azadi Square, Tehran's main square and the site of major national rallies over the past three decades.

The rallies were crucially important this year as the event comes only a month after limited riots in a dozen cities and towns across the country.

Led by the Founder of the Revolution, Imam Khomeini, Iranians confronted the forces of US-proxy Mohammad-Reza Pahlavi in late 1977 to end dictatorship rule in the country.

Ayatollah Ruhollah Khomeini returned from exile to Iran to be received by cheering crowds after the departure of the Shah in mid-January 1979. Two weeks later, the country saw the Islamic Revolution.

The final collapse of the Shah's regime came on February 11, 1979, when the military renounced its loyalty to the Shah and joined the revolutionary forces.

Today, after 39 years, Iranians have turned out in the millions to mark the historic day once again, demonstrating their adherence to the principles and philosophy of the Islamic Republic.

On April 1, 1979, Iranians cast their ballots in a national referendum. An astonishing 98.2 percent of the votes endorsed the establishment of an Islamic Republic.

Meantime, a new poll, conducted by the Center for International and Security Studies at Maryland University (CISSM) and IranPoll, in the aftermath of the recent protests and riots in Iran found the population's strong support for the country's political system and its regional and missile policies.

Based on the poll, conducted between Jan. 16 and 24, most Iranians strongly disagree with the idea of changing the country's political system, while a good majority of the population also back up Iran's regional and missiles policies.

The results of the poll, also cited by Washington Post, showed that just 4.9% of respondents strongly agreed that the political system in Iran needs fundamental change. The finding may somehow explain why the number of rioters was too small during the unrests in late December and early January, when a few thousand took out to the streets in roughly more than a dozen towns and cities to shout protest against the establishment.

Also, with regard to Iran's missile program that has come under the spotlight ever since Tehran and the six world powers struck a deal over the former's nuclear capability, the findings of the CISSM poll are very telling. Only 8.8% of participants strongly believed that Iran should spend less money on its missile program.

Also, only 21.5% of those who have taken part in the polling believed that the government should spend less in places like Syria and Iraq.

Meantime, only 21.7% of Iranians strongly agree that the government should not strictly enforce Islamic law, according to the findings of the poll.

Another part of the poll indicates that 63% of Iranian people believe that the government should be more forceful to stop rioters while just 9% think that US President Donald Trump's support for rioters benefited them.

Though US President Donald Trump was among a number of US officials who voiced their support for Iranians during the protests — Trump tweeted five times in three days about the protests at the end of December, offering support for the protesters and criticizing the government — the poll found 48 percent of Iranians felt comments by the American leader and other US officials had no effect.