TEHRAN (defapress) – Iran’s envoy to the United Nations Gholamali Khoshroo in his meeting with the United Nations Secretary General António Guterres on Wednesday warned that supporting any unilateral and unplanned move by the UN Security Council about the situation in Yemen could lead to further deterioration.
News ID: 68798 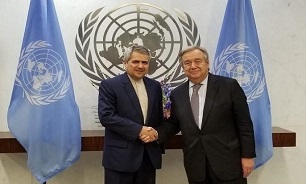 Given the above issue, any illogical measures in UN Security Council about Yemen will lead to the aggravation of situation severely, Shoshroo reiterated.

Iran’s permanent UN envoy expressed readiness of his country to cooperate with Martin Griffiths the new UN envoy for Yemen Affairs in order to end three-year crisis in this impoverished country.

In this visit, Khoshroo pointed to the catastrophic humanitarian situation in Yemen and the need for a political solution in this regard and warned that UN’s support of any unilateral and unobjectionable move could lead to further deterioration of situation in Yemen.

For his part, UN Secretary General António Guterres stated that he would make his utmost effort to reach political reconciliation in Yemen.

The two side also emphasized the need to continue political process to resolve Syrian crisis.

Khoshroo expressed his thanks to UN secretary general for his message of condolences sent to the bereaved families of victims of recent plane crash in Iran.