The protector of the martyr "Sha'ban Moysayebi Rukni Kalai" has stated in his will: "You must be modest, be helpful to the commandments of Allah! Beware of the words of the Prophets. Be modest before the leaders of the faith and Oli'lamer are brought down, We must learn from them. Behind they will fight against the oppressors of the world. "
News ID: 69005 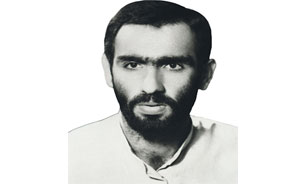 According to the reporter of Sajed , the protector of the martyr "Sha'ban Mosayebi Rukni Kalai" was opened to Behshahr on December 5, 1336 in the village of "Ghareghaghan". On March 5, 1983, Valfajr 6 operations in the area of Majnoon Island throughout the dismantling of the mine were attained to a high degree of martyrdom.

Here is the text of the wisdom of this martyr:

"In the name of God

I lead you to a trade that will help you for freedom of a painful torment.

Go to God and His Prophet, and end in the way of God from side to side your wealth and property, as well as physical vigor. It is better than any trade if you are wise. It is better for you than any other business to run away from suffering and pain. Allah passes from your sins and enters in the gardens that flow during the rivers and streams under the trees, and go back clean gardens in the paradise of everlasting rest. That is great salvation.

martyrdom in the reason of God is not something that can be z with human measurements of ordinary motives, and the martyr in the path of God's right and cause cannot be documented with the leeway of a high status, whose tremendous value, divine standards, and the high position of this famous vision, Not only our hands are the inhabitants of this and that short, which the Aflakians are also unable to arrive at. (Imam Khomeini)

Greetings and Peace be upon Khatam Al-Anbiah, the Prophet Muhammad (PBUH) and Imams, and greetings and salutations of the last brilliant star of the province and Imamate of Imam Zaman (AJ), fineness and salutation on the assistant to Imam Khomeini, and salutations to the family of the martyrs and the disabled and Wounded and locked up prisoners.

Those who love the unjust practices of ugly acts between the Islamic community, and promote dishonesty on the part of the people, Such people will be a throbbing anguish in the world and in the after this.

Brothers and sisters, I think that you are good and set your route of action. Keep alive and united from the blood of the martyrs and the Imam's line and try to increase Islam and the rule of the Quran Always remember God and all your events and sayings are your activities for the sake of God Read the Qur'an and fill the location of the Friday prayers as much as possible. It is a moment in your prayer for the advent of Imam Mahdi (aj), so that the world's only universal rule and justice will be established throughout the world. I will talk with you about the sisters of Zaynab's clique who, in the ranks of the demonstrations, put a firm fist on the mouth of all global arrogance You must be more alert than ever Hijab, keep your veil. The trenches at the back your front are your sisters. With your wives you have to fight in order to cover them so that they are better for their comfort.

My message as a martyr's protector who gives his blood to his message of blood on the heart of your Muslim nation, It is that the continuance of the Islamic Revolution depends on the issuance of all nations, now that the global conceit led by the United States by attacing Saddam the Ba'athist to the land of Allah Akbar to turn off the call of Allah the Great has given me the blessing of God. I can test myself in the war against the infidels. We did not make a revolution that would only secure the sovereignty and freedom of our country. In order to save our humanity from unawareness, we revived to save the subjugated from the oppressors in order to save the browbeaten from the oppressors and to rule the religion of God throughout the whole world, and the continuation of this rebellion does not involve the blood of the kind and martyrs of Iran. Do not be indifferent to the destiny of God's people. And watch unkind oppressors on the oppressed. We do not have a viewer in Islam, like the Kufa people.

The Qur'an in Sura Ahzab, verse 59, says: "Do you want to tell your wives and your daughters and believing women that you are leaving your home?" The Prophet (PBUH) the house is tied to their tents, which is closer to being known for virtue and chastity, and not being harassed by the devious ones. Allah is Forgiving and Merciful. My dear parents, the death of a young child for parents it’s sad and painful, and I know that when hearing my martyrdom, my heart is tender and sad, but what do I do? My mother and father, my soul is a guard. I am not yours. I belong to God, and I came to know that I know that I belong to God.

I want you to be a parent of a martyrs guard, as a martyr child, because the assignment of all the guards is based on his heavenly revolution. I speak to you with the brothers of the guard, the helpers of Hussein (AS), the helpers of the Imam of the time (Aj) Aroahna al-Fadaa Khomeini favors.

Remember, when you asked for help from your Lord in the battle (Badr), and he accepted your ask for and said, "I will help you with a thousand angels who fall in sequence."

If you help Allah strengthen the school and the path of the Father, Allah will also help you, even in ways that the human person himself does not think; and Wendy Lemma Troy.

Every human being does anything for himself. He has done everything for himself.
Remember that the grace God gave you when the army of many nonbelievers gathered against you, then we sent you with the help and help of a grand wind and an immense army of angels who did not see.

The first step in Islam is the second step of faith, the third step of piety and the fourth step that arrive at the peak of humanity. The name of the last peak is confidence.

The good brothers of the pure men of men with God of the children of Islam and the supporters of the strength of Allah, learn the Islamic teachings and revive and revive the spirit. Try to be with Allah. Read the Qur'an Read the treatise. Increase your reading. Lower sleep, Be in secret with God. Do not hesitate to love your Quran and the love of the Beat and the leadership at your best pace. If you do not produce up in your heart, the path that you are going is all right. You have to believe that you have a heartbeat of love. You must consider that you must be virtuous. You must be attentive and not responsible of the state, because you are oppressing yourself so be human so that God will increase the amount of your salaries and services in this world.

Prophet to say people consider that you think that it's time for a man to kill himself and lose his soul do humbleness with people Do not think that you rely on power you do not have to feel that you are from the position Power speaks. People should not feel that you belief that I have a gun (I -3) and I have the power. No brothers should see you in the excellence of their behavior to identify with that you are not abusing the power and making sure that you do not abuse your position. Dear brothers of Yaran Hussein (AS) and the brothers of the Prophet (AS), to Malek Ashtar, when he is walking in the street and in the street, he is so humble, he thinks that he is begging for a walk, even one marketplace that this man of God from the front His place was spilled and spit on him, and he is affronted by telling him that he is the owner. This is the great commandant of the army. This is the power. This is part of the Ali (AS) army.

Now, you need to know the rest better than the brothers. We should be. We learn from our accompanying person and our families. This is the excellence of the method of the one soldier Ali ibn Abi Talib (AS), and you should be so.

You must be modest You should be if one person has the power to force you to entrust brutality Your personal rights must be a hadith Mohammad the Prophet (SA) must forgive each other so that your hatred breaks out Brothers in among men and in one Do not find rest, and when you learn something, learn to teach others, and this will show that the spirit awakens and manifests itself, and hears the words of the Imam of the Ummah dozens of times, and does not tire of his words, and if you are tired of your work, you will know the Light Your confidence, piety and breath will soon penetrate you and you will always find those who are human beings and in line.

Are my scholars, believers in God written the best human traits attribute is humility? You must be modest Behaves against God's commandments Beware of the words of the prophets Agitate against the elders of the faith and the first Almareh We must learn from them We have to fight them at the back the conceited worlds Learn the lessons of theology and ethics And we should not wait for them to come after us, but we must go after them, because a person who does not want to make himself cannot make another.

We must put ourselves at the compassion of the clerics totally categorically To be able to learn spiritual and religious uses from them. "