Tehran provisional Friday Prayers leader condemned what he called a coalition among Saudis, Americans, and Zionists to force Muslims to abandon their religious beliefs.
News ID: 69691 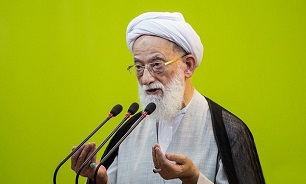 Tehran (Defapress) Ayatollah Mohammad Emami-Kashani said at this week’s Friday Prayers in Tehran that the West’s enmity against Islam dates back to along time ago as the British founded Wahhabism in Saudi Arabia.

Ayatollah Kashani added that the vicious triangle comprised of the United States, the Saudi Arabia and Tel Aviv have started enmity against the Islamic world and so far, they have committed many crimes in Syria, Lebanon, Iraq, Yemen, Africa, and elsewhere in the world, warning that they have established schools to train terrorism and propagate it to the other places.

He elaborated more on that saying “with the power of the United States and in line with the Zionists’ policies, as well as with the money and ideological power that exist in Saudi Arabia, they want to take the rich Islamic beliefs away from the Muslims” adding “it is our duty to stand against that vicious triangle.”

Tehran’s Friday Prayers Imam at the end of his remarks urged Iranians to buy domestically produced products in line with the guidelines of the Iranian Leader.