Chief of Staff of the Iranian Armed Forces Major General Mohammad Hossein Baqeri deplored Washington’s major role in causing conflicts in the Middle East and said the US is providing the grounds for more wars by supplying weapons to the Saudi regime.
News ID: 69818 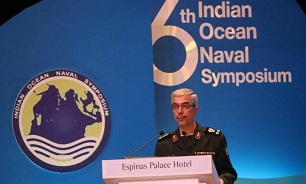 TEHRAN (Defapress) –“By deploying military units to various parts (of the world) and using the bullying rhetoric, the US is spreading disorder,” Major General Baqeri said, addressing the Indian Ocean Naval Symposium (IONS) 2018 that opened in Tehran on Monday.

He added that the US has created turmoil in most parts of the West Asia region through supporting the Daesh (ISIS or ISIL) terrorist group.

Washington is also promoting non-commitment to international agreements, the commander said, adding that, for example, it has violated the 2015 nuclear deal between Tehran and the Group 5+1 (Russia, China, US, Britain, France, and Germany).

“The United States has set the ground for crises, wars and an arms race by sending weapons to Saudi Arabia,” Major General Baqeri went on to say.

During the conference, Iran officially assumes presidency of the symposium for two years.