Joint drill to be held in Indian Ocean: Iran cmdr 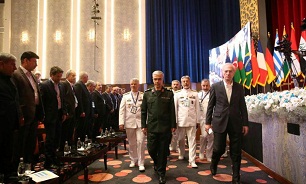 Tehran, (Defapress)'In the two-year period, the necessary meetings and conferences will be held to enhance the security in the Indian Ocean,' said General Baqeri.

The Indian Ocean Naval Symposium is the biggest military summit in Iran's history and its hosting has been ceded to Iran for two years.

Elsewhere his speech, General Baqeri said that Iran, relying on its capability, has extended brotherly hand to its neighbors.

The US and certain powers are creating and spreading disorder by dispatching military forces to different parts of the world, the top commander said, adding Washington through its support for the terrorist group of Daesh (ISIS) has created crisis in big parts of West Asia and prepared the ground for massacre and displacement of people.

By sending weapons to the regional countries including Saudi Arabia, the US is trying to pave the way for the start of a war, Baqeri stressed.

Baqeri said any changes in the Indian Ocean security condition will have direct impact on security in different parts of the world.

The Iranian Armed Forces as pioneer in counter-terrorism moves are ready to share experiences with other countries, he said.

Iran's Navy has dispatched 51 flotillas to the Indian Ocean to fight pirates and ensure security in the [international] waters, the top commander said.

He added the presence of the big powers' military forces and their interference in the regional affairs is the cause of insecurity in the region an example of which is the bombardment of the Yemeni people.