Iran to quit JCPOA in face of US nuclear-related sanctions

Iran’s diplomatic mission to the United Nations says Tehran would treat the re-imposition of nuclear-related sanctions by US as “grounds to cease performing its commitments under the JCPOA in whole or in part.”
News ID: 70967 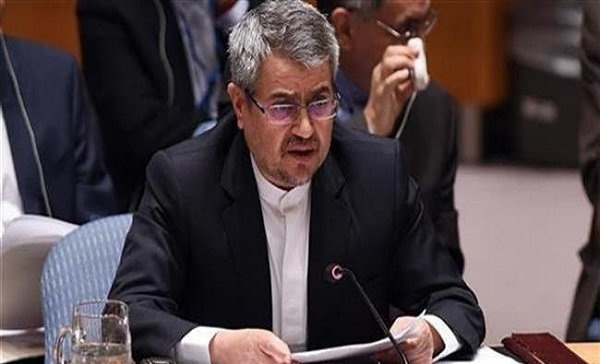 TEHRAN (Defapress) – Ambassador and Permanent Representative of the Islamic Republic of Iran to the United Nations Gholamali Khoshroo made the remarks in a statement following the Security Council meeting on 27 June 2017.

Khoshroo called the meeting of the Security Council “a demonstration of the United States isolation with regard to the Joint Comprehensive Plan of Action (JCPOA)”, saying that the meeting “highlighted once again the international community's full support for diplomacy and multilateralism over unilateralism and pressure.”

“Unlike the Islamic Republic of Iran, which continues to fulfil its undertakings under the JCPOA, as repeatedly and consistently verified by the International Atomic Energy Agency (IAEA), the United States has consistently failed — since “implementation day”, and particularly after the assumption of office by President Trump — to abide by its commitments under the JCPOA,” said Khoshroo.

“The unilateral and unlawful US act of unwarranted withdrawal from the JCPOA renders it responsible for the most blatant material breach of its obligations under the agreement and brazen non-compliance with the Security Council resolution 2231 (2015),” said the Iranian envoy, calling for the US to be held “accountable for the consequences of its reckless and wrongful act, which flies in the face of the United Nations Charter and the principles of international law.”

“All member states, international organizations and especially other JCPOA participants must remain cognizant of their shared responsibility to safeguard the agreement,” he stressed.

“There shall be no doubt that if, after the exhaustion of available remedies, rights and benefits of the Iranian people are not fully guaranteed, it is Iran’s unquestionable right — recognized also under the JCPOA and Security Council resolution 2231 (2015) — to take appropriate actions and to treat the re-imposition of nuclear-related sanctions by the United States “as grounds to cease performing its commitments under the JCPOA in whole or in part”,” Khoshroo concluded.