White Helmets Pulled Back from Syria to Avoid Intelligence Leak

The western countries and Israel had no option other than taking out the White Helmets from Southern Syria for the fear that they might expose sensitive intel after their capture by government troops, media outlets said Wednesday.
News ID: 71392 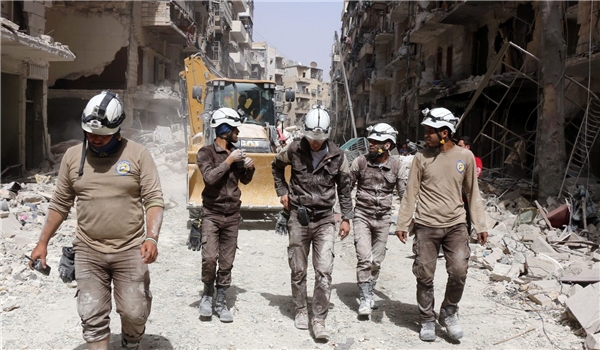 TEHRAN (Defapress)- The West and Tel Aviv had two options of either withdrawing the White Helmets from Southern Syria or killing them, the Arabic-language service of Russia Today cited a report by Expert Online.

It pointed to the failure of the White Helmets to create fake stories and a halt in financial aid to them, and said since the White Helmets had a lot of intel with them, Washington could not leave them to be given to Syrian President Bashar Assad.

The report said that killing the White Helmets was considered as one of the cheapest and most confident options which could later be blamed on the Syrian government.

"But the risks were high as few could have survived who would then run to the Syrian government to save their lives and they could have leaked vital intel during the process; hence, the western countries decided to pave the way for their escape in the shortest possible time," it added.

The terrorists' exit from Syria occurred at a time when the Syrian army took control of borders with Jordan; White Helmets had been besieged in a narrow strip in the Golan Heights.

In a relevant development on Monday, the Russian Foreign Ministry said in an official commentary on Monday that flight of workers of the White Helmets nongovernmental organization from Syria with foreign assistance shows graphically whose orders they fulfilled and whose money they existed on.

"The information available to us suggests the Westerners evacuated a big group of those pseudo-aid workers to Jordan via the Israeli territory," the commentary noted, adding that "meanwhile, it is known perfectly well that the White Helmets have been involved in the most odious provocations during the conflict in Syria", TASS reported.

"The organization concentrated its operations exclusively in the areas controlled by Islamic radicals, forging overt fakes that would be used as pretexts for charges against the Syrian authorities," the Foreign Ministry added.

The Helmets had a particular fancy for shooting the propagandistic clips, which the Western media and social networks would circulate endlessly, it noted.

"It’s quite emblematic that the White Helmets preferred to flee Syria with foreign assistance, thus unmasking their essence and hypocrisy to the whole world," the commentary said, adding that "as if acting out the principle 'an uneasy conscience betrays itself', these people showed in a most graphic way whose orders they had been fulfilling and whose money they had existed on".

Moscow also called attention to the recent comments by the US Department of State official Spokesperson upon the results of a telephone conversation between Foreign Minister Sergei Lavrov and US Secretary of State Michael Pompeo.

"These comments said in gushing terms, so typical of the Americans, Russia was failing to act properly on its obligations regarding southwestern Syria," the ministry said, adding that "we’d like to say in this connection the situation is entirely opposite in reality. It was Washington that did not do anything over several months in the Southwestern de-escalation zone to separate the so-called moderate opposition units from the terrorist of the Islamic State and Jabhat al-Nusra".

"As a results of successful actions of the Syrian Armed Forces and with our assistance, law and order are returning to Southwestern Syria and conditions are arising for people’s return of peaceful life there," the ministry stressed.

Israel evacuated several hundred White Helmet staff and their families from the Golan Heights region in Southern Syria to Jordan overnight on Saturday. The initial plan reportedly involved the evacuation of 800 people.