US President Donald Trump announced a doubling of steel and aluminum tariffs on Turkey, piling economic pressure on the NATO ally after its currency went into a tail-spin.
News ID: 71706 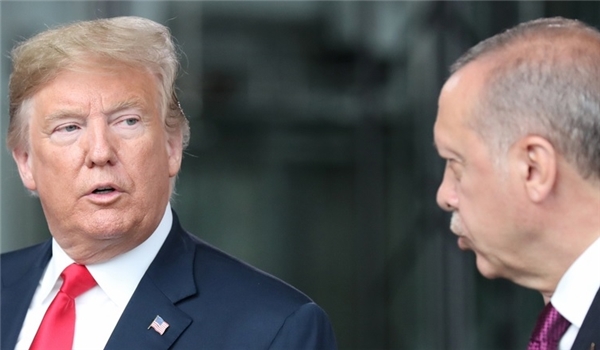 The Turkish currency extended its losses following Trump's statement, dropping as much as 20 percent amid growing worries about worsening relations with the US.

Washington has been pushing Ankara to release an American pastor, who is being held on terrorism charges.

Earlier this week, Erdogan ordered the asset freeze of two US officials in retaliation for sanctions imposed on Turkey's justice and interior ministers over the detention of an Evangelical Christian pastor Andrew Brunson.

Since the start of the year, the lira has more than 30 percent of its value against the US dollar, with the currency tumbling even faster after the country's June presidential election which saw Erdogan re-elected with expanded power.

On Friday, Erdogan renewed a call for Turks to exchange gold and dollars into liras, framing the country's currency crisis as a "national battle" against economic enemies.

"The dollar cannot block our path," Erdogan said during a speech in the Black Sea city of Rize, adding that "however, I say it once again from here. If there is anyone who has dollars or gold under their pillows, they should go exchange it for liras at our banks".

Erdogan, a self-described "enemy of interest rates", wants cheap credit from banks to fuel growth, but investors fear the economy is overheating and could be set for a hard landing.

But in a defiant tone, the president brushed aside concerns, telling the roaring supporters not to worry.

"There are several campaigns being carried out [against Turkey]. Do not heed them," Erdogan said, adding that "if they have their dollars, we have our people, our God. Know this: We are better than yesterday, we will be even better tomorrow. Have no doubts about it".

Despite the turmoil, Turkey became the fastest-growing country in the world last year, with an economic growth rate of 7.4 percent, according to the government.

Following Trump's announcement on Twitter that he would double duties on Turkish aluminium and steel, to 20 percent and 50 percent respectively, Ankara responded by saying the tariffs were against the rules of the World Trade Organization (WTO).

"Turkey expects other member countries to abide by international rules," the Turkish trade ministry said in a statement, adding that it would support steel and aluminum exporters in all international platforms. It also said the US remained an important trade partner.

Spokesman for Turkey's foreign ministry Hami Aksoy stated in a statement that it would retaliate against the tariffs as it has done so far, stressing that sanctions and pressure would only serve to harm ties between the two NATO allies.

Al-Jazeera's Sinem Koseoglu, reporting from Turkey's largest city of Istanbul, said that "the growing but fragile" Turkish economy "has been struggling for a few years over a combination of several financial and political factors".

Analysts stressed that the lira was not protected against any currency speculation, especially after a failed coup in 2016, while the dispute with the US over a variety of issues has complicated things further.

"There is a currency crisis, kind of promoted by the geopolitical risks, and which is obviously used by the American foreign policy decision-makers," Selva Tor, a financial security analyst, told Al-Jazeera.

Apart from the disagreement over Brunson's detention, Koseoglu added that another factor is Ankara's unwillingness to join recent US sanctions against Tehran in the wake of Washington's withdrawal from the 2015 Iran nuclear deal.

Turkey is a purchaser of energy from Iran, along with Russia and Azerbaijan.

Meanwhile, the crisis was also felt abroad, with investors selling shares in European banks amid concerns about their Turkey exposure.

Jane Foley, head of Rabobank's foreign exchange strategy, announced that the Turkish government has a huge task ahead to earn back investors' trust.

"The speculation in the market is that if that Central Bank is to retake credibility, it might need to hike interest rates next month by 5 or 10 percent ... which seems very unlikely given that Erdogan is very much against high-interest rates in Turkey," she told Al-Jazeera.