TEHRAN (defapress) – Head of the Atomic Energy Organization of Iran (AEOI) Ali Akbar Salehi said the reaction of the global community to Washington’s withdrawal from the JCPOA raises serious doubts about validity and wisdom of the American policy.
News ID: 72463 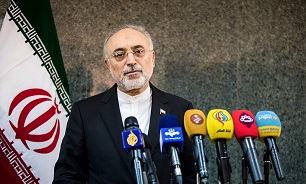 “The reaction at the international level to the unlawful US withdrawal from the JCPOA clearly raises serious doubts concerning the validity and wisdom of the American policy,” Salehi said on Monday in a speech to the 62nd IAEA General Conference underway in the Austrian capital of Vienna.

He added, “The international community’s opposition to the US withdrawal, as widely analyzed and discussed and as all of us understand, does not merely reflect their deep anger at the American unilateralism but also their concerns about the extremely difficult situation in our immediate region with all its pervasive chaos, and the existing menace of terrorism.”

Representatives from the IAEA’s member states, including at ministerial level and above, have convened at the 62nd IAEA General Conference in Vienna to discuss key elements of the agency’s priorities in its work on the peaceful use of nuclear technologies.

Following is the full text of Salehi’s speech:

It is my pleasure and delight to join you here at the 62nd General Conference. Seizing the opportunity to congratulate you, Madam President, on your deserved election, I am confident that under your able and wise presidency, the Conference will achieve the best of its collective results. Please be assured of the full cooperation of my delegation.

The General Conference, as the Agency’s highest policy-making body, provides all of us with an opportunity to present our national perspective on a wide range of issues and challenges.

Let me just start with one of the most important global concerns, that is: the fate of the Joint Comprehensive Plan of Action (JCPOA). I really doubt that the IAEA General Conference needs to be convinced of the historic significance and importance of the hard-won multilateral agreement on the Iranian nuclear issue. It took the concerned parties many years and a long process of tough negotiations to reach an agreement. The two sides, decided to limit their expectations and aspirations and instead, settle for a mutually agreed set of solutions. Ever since that the agreement went into effect in January 2016, Iran, as stipulated in 12 consecutive IAEA reports, has fully complied with the provisions of the deal and implemented all its ensuing nuclear-related commitments. This is a simple, undeniable and generally recognized fact.

On the other side, everybody is well aware of the U.S. approach and its particular misconduct. Following a period of less-than-faithful compliance with the provisions of the agreement, under the previous administration and subsequently more so under the current administration, the US Government eventually withdrew from the JCPOA in May 2018. The American unilateral decision, a blatant breach of the UN Security Council Resolution 2231 and an open travesty of the fundamental and cherished principles of international law and multilateralism, has placed in serious jeopardy the fate of this valuable and unique science-diplomacy achievement. Let me be very clear about the negative impact and consequences of this reckless act. As discerned almost unanimously by the international community, this ominous move is doomed to have serious repercussions for the international and regional peace and security.

The reaction at the international level to the unlawful U.S. withdrawal from the JCPOA, clearly raises serious doubts concerning the validity and wisdom of the American policy. The international community’s opposition to the US withdrawal, as widely analyzed and discussed and as all of us understand, does not merely reflect their deep anger at the American unilateralism but also their concerns about the extremely difficult situation in our immediate region with all its pervasive chaos, and the existing menace of terrorism.

As to the Nuclear Weapons-Free-Zone in the Middle East, Iran has since 1974 been a strong proponent of its establishment. That said, however, one cannot but lament the deliberate disregard by some, of the actual threat posed by the Zionist regime’s adamant refusal to join NPT, and worse, its possession of a considerable nuclear arsenal as well as its denial of IAEA inspections. While, in the case of Iran, as stated by the Director-General, the most robust verification system is in existence anywhere in the world in my country.

Here is one of today’s controversial issues, full-fledged execution of NPT related safeguards in the case of a party to the treaty and turning a totally blind eye to a non-NPT party. Such a blatant and discriminatory conduct is a travesty of justice.

What has transpired thus far on the JCPOA, by the EU and others, while encouraging, certainly needs to be further complemented through more solid and practical steps. Now is the time for EU to uphold its commitments. Here, we believe that the so far adopted approach of gradualism is not the proper mechanism whatsoever in response to the situation arising from the American reckless policy in undermining the UN Security Council resolution 2231.

Observing the merits of the nuclear deal and its moral imperative, we hope the Agency will continue executing its mandate with necessary professionalism and impartiality. Technical reports should be prepared solely on the basis of objective assessments and need to be kept free from politically-motivated elements. Within this context, we look forward to the Agency’s expedition of the process of drawing “broader conclusion” on our nuclear program.

The Islamic Republic of Iran aspires to use nuclear science and technology for managing water supplies as well as responding to climate change, while continuing generating electricity, and improving health, food and agriculture. Here, we believe that one of the main missions of IAEA is to help Member States to achieve their Sustainable Development Goals through transfer of experience, share of knowledge and provision of the required equipment.

Given that nuclear power makes a significant contribution to reducing greenhouse gas emissions and improving energy security, Iran has envisioned a long and aspiring plan in order to increase the share of nuclear power in the country’s energy mix, and in line with this vision, is implementing phases 2 and 3 of Bushehr Nuclear Power Plant (BNPP). Accordingly, the first concrete pouring for BNPP-2 has been planned for the third quarter of 2019. These reactors will also run two desalination plants. The safe and secure operation of BNPP has resulted in generation of 30 TWh (terawatt hours) so far and the World Association of Nuclear Operators (WANO) through its peer review mechanism has evaluated its performance and has upgraded its safety performance indicators from D to B. Moreover, OSART mission to Bushehr has been planned later this year. Currently, Iran`s need to electricity at its peak stands for 65,000 megawatts.

Iran also is seriously pursuing fusion technology. So far few pertinent steps have been taken and by the same token, fruitful consultations and eminent cooperation with a number of countries are underway. Moreover, we have made progress in redesigning Khondab (Arak) Heavy Water Research Reactor in close cooperation with China, and advancing the production of stable isotopes with the assistance of the Russian Federation.

Nuclear safety has always been a high priority for Iran and, as a result, we attach great importance to strengthening the relevant safety standards. Iran through cooperation with the EU among others is determined to establish an advanced nuclear safety center equipped with modern technologies and equipment and has so far achieved tangible progress in this regard.

On the issue of nuclear security, however, we believe that the undertaken measures should neither hamper the international cooperation in the field of peaceful nuclear activities nor should it undermine the established priorities of the Agency’s technical cooperation program. The Islamic Republic of Iran emphasizes that the responsibility of nuclear security rests entirely with Member States and the Agency`s role should be merely aimed at enhancing national infrastructures, upon voluntary request. We deem issues of terrorism and cyber-attacks as well as illicit trafficking as the most significant nuclear security threats.

Regarding the State Level Approach (SLA) we believe that despite the recent report by the Director General (GOV/2018/20), there are still ambiguities and concerns which shall be resolved before taking further action.

On the issue of technical cooperation, IAEA is expected to assist Member States based on their needs and priorities. Iran, on its part as a pioneering nuclear state remains ready to share its achievements with other member states, specifically those in our neighboring region. By the same token, the I.R. Iran looks forward to the IAEA Ministerial Conference on Nuclear Science and Technology, in November 2018, in result of which we highly expect the IAEA to facilitate the transfer of nuclear science and technology to developing countries.

As always, we will look forward to a day when the motto of peaceful use of nuclear energy for all and nuclear weapons for none, is universally recognized and materialized. I conclude on this very point, and thank you Madam President, and the whole house for their gracious patience and indulgence.