TEHRAN (defapress)- A UK-based charity expressed concerns about the humanitarian repercussions of renewed Saudi attacks on Yemen’s port city of Hudaydah, saying a total of 5.2 million children are at risk of famine amid the ongoing war in the country.
News ID: 72512 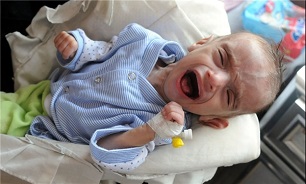 In a report released on Tuesday, Save the Children warned that any disruption to supplies coming through Hudaydah, which is a lifeline for millions of Yemenis, could “cause starvation on an unprecedented scale”, presstv reported.

It also estimated that an extra one million Yemeni children risk falling into famine as prices of food and fuel soar, bringing the total to 5.2 million.

Any closure at Hudaydah “would put the lives of hundreds of thousands of children in immediate danger while pushing millions more into famine”, the charity added.

Over the past few months, Hudaydah, through which flows almost 80 percent of Yemen’s imports, has witnessed deadly ground and aerial attacks by the Riyadh regime and its allies.

Saudi Arabia claims that Ansarullah forces are using Hudaydah for weapons delivery, an allegation rejected by the fighters.

“Even the smallest disruption to food, fuel and aid supplies through its vital port could mean death for hundreds of thousands of malnourished children unable to get the food they need to stay alive,” Tamer Kirolos, Save the Children’s representative in Yemen, said.

“It could drive up the price of fuel --- and as a result transport --- to such an extent that families can’t even afford to take their sick children to hospital,” Kirolos added.

Earlier this month, violent clashes resumed between Ansarullah fighters and Saudi-backed pro-Hadi militants in Hudaydah after the latest round of peace talks between Yemen’s warring sides collapsed in the Swiss city Geneva.

Helle Thorning-Schmidt, CEO of Save the Children International, warned that the war endangers the lives of an entire generation of Yemeni children.

“Millions of children don’t know when or if their next meal will come,” she said. “This war risks killing an entire generation of Yemen’s children who face multiple threats, from bombs to hunger to preventable diseases like cholera,” she added.

Last week, The Associated Press reported that many Yemeni families have nothing to eat but leaves.

Saudi Arabia and its allies launched a brutal war, code-named Operation Decisive Storm, against Yemen in March 2015 in an attempt to reinstall Hadi, a staunch ally of Riyadh, and crush the Ansarullah.

The Western-backed offensive initially consisted of a bombing campaign, but was later coupled with a naval blockade and the deployment of ground forces into Yemen.

The blockade on Yemen has smothered humanitarian deliveries of food and medicine to the import-dependent state.

An estimated 8.4 million Yemenis are on the verge of starvation while almost 18 million lack access to good, nutritious food.