Trump: Juncker Is A ‘Tough, Tough Cookie’ Who Crumbled

TEHRAN (defapress)- US President Donald Trump described his European counterpart as a “tough, tough cookie” who gave into US pressure to negotiate a new trade deal after Washington threatened tariffs on European autos.
News ID: 72515 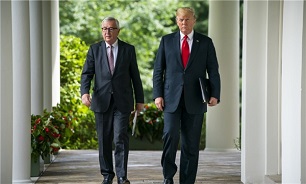 “Honestly, he was in my office so quickly from Europe that I didn’t know they had airplanes that flew that fast. I said ‘Where did you find this plane?'” Trump said at a joint press conference with Polish President Andrzej Duda, Politico reported.

“And [now] we have the semblance of a deal. Because it’s — to a large extent — economically all about cars,” he added.

Trump was referring to a meeting he had with European Commission President Jean-Claude Juncker in July, which led the two to start talks aimed at reducing trade barriers across the Atlantic. Both pledged not to impose new tariffs on each other’s products as long as those negotiations were making progress.

That agreement came after the United States had already slapped duties on about $7.5 billion of European steel and aluminum and the EU retaliating against about $3.3 billion of US exports, including steel, agricultural products, peanut butter, cranberries, orange juice, boats, cosmetics and clothing.

“Jean-Claude is a tough man. He’s a very good man. I like him,” Trump stated, noting that “but he’s tough. He’s nasty. He’s the kind of guy I want negotiating for me, but he’s a tough, tough cookie”.

Before the meeting in July, Trump was also threatening to hit European-made autos with a 25-percent duty. That threat has been shelved, but Trump credited the proposal with persuading the EU to begin talks. He has also said erroneously that former President Barack Obama had been unable to negotiate EU talks, even though discussions had begun on the Transatlantic Trade and Investment Partnership.