TEHRAN (defapress)- Qatar Airways reported a loss of more than $69 million amid a Gulf blockade against Doha by its neighbouring countries in what the airline called the "most challenging year in its 20-year history".
News ID: 72530 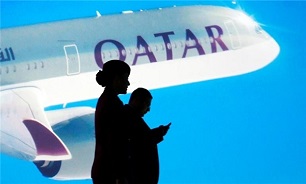 The airline attributed the loss "directly to the illegal blockade" imposed on the Gulf nation by Saudi Arabia, the United Arab Emirates (UAE), Bahrain and Egypt since June 5, 2017.

Last year, the four Arab countries severed diplomatic and trade relations with Qatar, closing land, air and sea links, as they accused Doha of supporting terrorism and violating a 2014 agreement with members of the Gulf Cooperation Council (GCC). Qatar denies all allegations raised by the quartet.

"This turbulent year has inevitably had an impact on our financial results, which reflect the negative effect the illegal blockade has had on our airline," Qatar Airways CEO Akbar al-Baker said in a statement.

"However, I am pleased to say that thanks to our robust business planning, swift actions in the face of the crisis, our passenger-focused solutions and dedicated staff, the impact has been minimised - and has certainly not been as negative as our neighbouring countries may have hoped for," he added.

The Qatari airline, which lost access to 18 cities in the blockading nations, was forced to re-route its flights over Turkey, Iran and Oman.

Since the start of the Gulf crisis, Qatar Airways has launched 24 new destinations, but the expansion incurred additional launch costs, the airline said in a statement.

Its non-depreciated earnings were also lower by $483m due to the longer flying time and loss of departing seats from the blockading countries, Qatar Airways added.

In the previous fiscal year, the Doha-based company announced $541m in profits.

In an interview with Al-Jazeera earlier in June, CEO al-Baker acknowledged that the blockade "has impacted" his company, but vowed to continue growth and investments.

We have not capitulated, we have not given in to any demands," he said, adding that "we have continued our growth and Qatar has continued investments".

The Gulf crisis is now into its second year and mediation efforts led by Gulf neighbour Kuwait, as well as apparent shuttle diplomacy by the United States, have so far failed to end the diplomatic dispute.