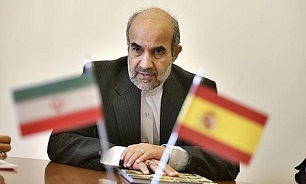 During the meetings in the Spanish capital on Friday, Fadayeefard underlined the significant role played by the two countries' parliaments to develop relations between Tehran and Madrid, and expressed the hope that the two countries will continue their parliamentary cooperation.

Fadayeefard underlined the need for the European countries' compliance with their commitments under the Joint Comprehensive Plan of Action.

The ambassador urged the European states to present guarantees for meeting Iran's interest.

García-Escudero, for his part, extended hope for the European Union to present necessary guarantees for preserving the Iran Deal by adopting independent policies.

She also reiterated that Spain policy is in line with preserving Iran nuclear deal and respecting its principles.

In a relevant development in late February, Tehran and Madrid signed two Memoranda of Understanding (MoUs) in Tehran in the political, economic and rail transport fields.

The signing ceremony was held in the presence of Iranian Foreign Minister Mohammad Javad Zarif and his Spanish counterpart Alfonso María Dastis Quecedo in the Iranian capital.

During the meeting, the Spanish foreign minister pointed to the longstanding history of amicable relationship between Iran and Spain in all fields, and said, “This is the first time that I visit Iran and it is hoped that the two countries will strengthen their ties in the best form possible in future."

He pointed to the implementation of Joint Comprehensive Plan of Action (JCPOA) and said, "As a member of European Union, Spain is fully committed to this significant deal."