"Should Israel continue attacks in Syria, it will face regrettable reactions"

TEHRAN (defapress) – The top Iranian security official says that should Israel continue its attacks on Syrian Army and counter-terrorism forces in support of terrorist groups, it will face regrettable consequences.
News ID: 72708 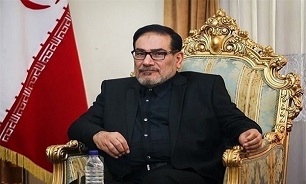 “The Zionist regime is seeking to consolidate the crisis in Syria and has taken actions in direct support of terrorist groups by targeting the Syrian army and counter-terrorism forces, but if it continues [its attacks] it will face regrettable reactions” Admiral Shamkhani said in the meeting.

He hailed the positive results of security cooperation between Iran and Russia in the field of fight against terrorism, adding “the principled policies of the two countries in developing cooperation … in various political, economic and security fields have played a decisive role in handling the regional security crises.”

Nikolai Patrushev, in turn, expressed his appreciation to Iran for hosting the first ‘Regional Security Dialogue’, describing it as a success in continuation of Iran’s credible fight against terrorism and attempts to create peace and stability in the region.

Patrushev noted “today, our region is facing the threat of moving failed terrorists in Iraq and Syria [to other parts of the region] by the United States and some of its allies,” adding that increased regional cooperation to address this alarming phenomenon is inevitable.

“If there is not a serious confrontation with the US unilateral and dangerous measures, Afghanistan will soon face a similar crisis like what was experienced in Iraq and Syria,” the Russian security council secretary underlined.

Explaining the effective role of Iran, Russia and Turkey in reducing tensions in Syria and hailing the recent agreement reached between Russian and Turkey on Idlib province, he added "the US government has spared no efforts to prevent the return of security to the region and is using terrorism as a tool in line with its goals against the actions taken by our governments to restore peace and stability to the region.”