TEHRAN (defapress) – Chief of General Staff of Iranian Armed Forces say neither negotiations with the United States nor with Europe can solve Iran’s problems, adding that only reliance on domestic resources can solve the problems.
News ID: 72720 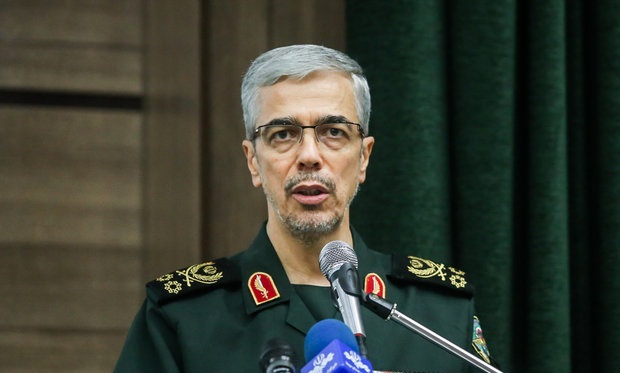 Major General Mohammad Hossein Bagheri made the remarks in a ceremony attended by the commanders of engineering corps at the Ministry of Agriculture Jihad on Thursday.

Referring to the 8-year resistance against Iraqi dictator Saddam Hussain regime which is called Sacred Defense in Iran, Bagheri said that Iranian could win the war through reliance on domestic resources despite the fact that the Saddam regime was provided with the most advanced weapons, including 700 advanced fighter jets.

The Chief of General Staff of Iranian Armed Forces said that during the 8-year war, Iran was under much severe sanctions and people were living under constant bombardment, but today Iran is facing the threats hundreds of miles away from its territories.

“If we expect the United States, Europe solve our problems at the negotiating table…, we are completely wrong” said Bagheri, stressing that the country needs to face the problems by returning to the experiences it obtained during 8-year imposed war.