Europe determined to confront US unilateralism 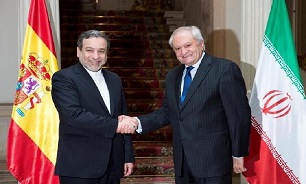 The European Union is seeking to provide a mechanism to cover Iran-Europe relations independent of the central bank and other monetary and financial bodies.

As long as Iran and the European Union preserve Iran deal, they will have the opportunity to find a solution for removing trade barriers, he said.

During the meeting, both sides discussed issues of mutual interests such as political, economic, regional and international issues.

Iranian and Spanish diplomats also discussed regional developments especially future of Syria, massacre of civilians in Yemen, the recent development in the Persian Gulf and issues related to the terrorist groups like Daesh.