TEHRAN (defapress) - Jeremy Hunt has fuelled speculation of a budding leadership bid after admitting he would like to be prime minister.
News ID: 74375 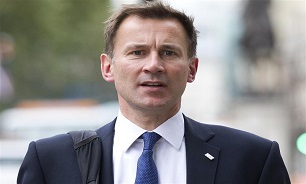 The foreign secretary, who is seen as a frontrunner to succeed Theresa May, said he would like to "have a crack at the top job".

As potential successors stepped up their campaigns, Mr. Hunt appeared to suggest that Ms. May should only stay in No 10 for a "few months".

International development secretary Penny Mordaunt, who is likely to throw her hat in the ring, will also be seen to make a leadership pitch this week when she lays out proposals for a managed no-deal Brexit, Independent reported.

Jostling among senior ministers has increased after Ms. May, seeking to save her job in the hours before last week's vote of no confidence in her, said she would step down before the 2022 general election.

While the prime minister saw off the bid to topple her, she was weakened by her decision to put a time limit on her premiership and the fact that 117 of her own MPs voted against her, with many Tory MPs privately saying she should step down after Britain leaves the EU next March.

Asked if he wanted to be prime minister, Mr. Hunt told The Sunday Telegraph: "I think every MP has a corner of their heart that says they would like to have a crack at the top job. I'm no different.

"But I think the first thing is to get us through this challenging next few months and I passionately believe Theresa May is the right person to do that."

The foreign secretary also insisted that Britain could "flourish and prosper" even if it crashes out of the EU without a deal.

That puts him at odds with other Cabinet ministers, including Chancellor Philip Hammond, justice secretary David Gauke and work and pensions Secretary Amber Rudd, who are said to be warming to the idea of a fresh Brexit referendum as a way to avoid a no-deal outcome.

Mr. Hunt said: "I've always thought that even in a no-deal situation this is a great country, we'll find a way to flourish and prosper. We've faced much bigger challenges in our history.

Ms. Mordaunt, who also supports a no-deal Brexit if Ms. May's proposed agreement is rejected by Parliament, is expected to lay out a plan on Monday that would involve using technological solutions to maintain an open border in Northern Ireland without the need for a deal with the EU.

However, Mr Gauke said he believed a number of ministers would resign if Ms May decides to abandon attempts to secure a Brexit deal, telling the Financial Times: “I couldn’t support a conscious decision to crash out at the end of March and I don’t think there are many who could.”

The major divisions between ministers over how Ms May should proceed if she is unable to get her current deal through Parliament are likely to be exposed at Tuesday’s Cabinet meeting.

While several ministers will push her to pivot to planning for no deal, the prime minister’s deputy, David Lidington, has met with Labour MPs to discuss building cross-party support for a fresh referendum, according to the Sunday Times.

Ms May’s chief of staff, Gavin Barwell, is also reported to have said another public vote is “the only way forward”.

However, he denied he was working to secure one, writing on Twitter: “Happy to confirm I am *not* planning a 2nd referendum with political opponents (or anyone else to anticipate the next question).”

And asked if the Cabinet had discussed another referendum, education secretary Damian Hinds told Sky News: “No. Government policy couldn’t be clearer. We are here to act on the will of the British people clearly expressed in the referendum.”