TEHRAN (defapress) – Foreign Ministry Spokesman Ghasemi said Mon. that the EU-Iran trade mechanism, aimed at bypassing US sanctions against Tehran, is not restricted to transactions regarding medicine and food products.
News ID: 74385 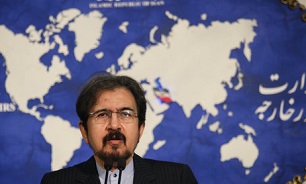 Bahram Ghasemi made the remark in his weekly press conference on Monday in response to a question about the credibility of the claims that the the Iran-EU trade mechanism, officially known as Special Purpose Vehicle (SPV), will only meet Iran’s needs for medicine and food products in exchange for the country’s oil revenues.

“This mechanism has not been defined to only cover medicine and food products, and it must cover a range of transactions and economic and industrial cooperation, even investment,” Ghasemi stressed.

On Dec. 4, Iranian Foreign Minister Mohammad Javad Zarif also rejected the claims that the SPV will not cover oil sales and only includes humanitarian and food products, saying “Iran’s major export is oil” and the country’s oil sales is actually the focus of the EU’s promised trade mechanism.

The mechanism is part of the EU’s efforts to encourage Iran to remain in the nuclear deal following the unilateral withdrawal of the US back in May, by offering an alternative payment channel to keep trade flowing with Iran in defiance of US sanctions. According to EU's foreign policy chief Federica Mogherini, the mechanism will come into effect by the end of December.