TEHRAN (defapress)- Senior Advisor to the Iranian Parliament Speaker Hossein Amir Abdollahian said on Friday that the trilateral cooperation among Tehran, Moscow and Ankara will bring the US abuse of sanctions regime to its knees, adding that Europe will afterward gain confidence to stay independent from the US.
News ID: 74462 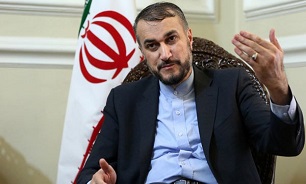 Senior Advisor to the Iranian Parliament Speaker Hossein Amir Abdollahian said, today in a post on his Twitter page, that by breaking the US sanctions, Iran, Turkey, and Russia can encourage Europe to be self-confident and stand against US pressures.

Amir Abdollahian added that “Iran, Turkey, Russia can bring sanctions to its knees” and can teach Europe to not rely on the United States and pursue an independent foreign policy.

“Europe will gain confidence and could start a new political life with less reliance on the United States,” the Iranian parliamentary official added in his post.

He also called for establishment of “new arrangements in the international politics by using the new opportunities.”

The Iranian senior diplomat made the remarks while visiting Madrid for talks with senior Spanish officials.

"We are waiting to see how Europe will defend its sovereignty against Washington's pressure," Araqchi underlined.

He further said the international community, except one or two countries, has condemned the US move to re-impose "unlawful" sanctions against Iran in violation of the United Nations Security Council Resolution 2231, which endorses the JCPOA.

However, the US is using its economic power and the dollar to impose its own demands on other countries, he added, noting that European companies seem to be taking US orders more seriously than those of their own governments.

The senior Iranian diplomat pointed to the latest report by the International Atomic Energy Agency (IAEA) that confirmed for the 13th times the Islamic Republic's adherence to its commitments under the JCPOA and said the "unreasonable and illogical" US exit from the JCPOA would lead to countries' lack of trust in dialogue, diplomacy and the Security Council's strategies.

Earlier on November 05, the European Union, France, Germany and Britain issued a joint statement regretting US' decision to impose new sanctions against Iran, saying that they will continue supporting the European companies engaging in legal business with Iran.

The reaction came after the US Treasury Department announced all sanctions on Iran lifted under the 2015 nuclear deal will be back in force on November 5.

The November 5 sanctions will be the second batch of bans to be re-imposed after Trump pulled the US out of the 2015 deal, which was signed by Iran and six world powers in 2015.

The sanctions reinstated on Iran on May 8 included boycott of Iran's crude supplies and bans on transfer of its crude revenues. There is a 180 days interval before these sanctions come into effect. Other US secondary sanctions are reinstated this month.