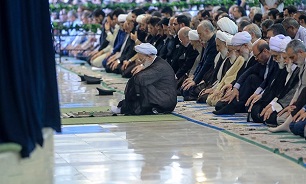 Addressing a large and fervent congregation of the people in Tehran on Friday, Ayatollah Emami Kashani said, "The world is just looking and the US is supporting the crimes against the Yemeni civilians; these crimes are committed by a regime that falsely claims to be serving two most important sacred places of Muslims."

He underlined that the West is going to experience another defeat in Yemen and their ally will also be defeated.