TEHRAN (defapress) – Deputy Coordinator of the Iranian Army Rear Admiral Habibollah Sayyari said that due to Iran’s readiness, the United States’ naval fleet in the Persian Gulf will not dare to take any measures against the country.
News ID: 74532 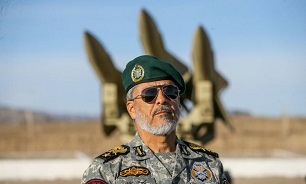 “Be sure that they [US fleet] don’t dare take measures against us. Our approach is to think like the nights of operations; it means we should always be ready,” he told reports Monday on the sideline of an event in Tehran.

On Friday, a US naval fleet including USS John C Stennis aircraft entered the Persian Gulf through Strait of Hormuz while the IRGC was conducting drills. According to reports, some 30 IRGC boats trailed the US fleet as it was passing through the strait.

Presence of countries’ naval fleets in high seas is normal and any state can sail in international waters according to international regulations, and Iran does that too, Sayyari noted.

“The presence of this [US] fleet is not important for us since it can do nothing against us,” he said, stressing that, “we will never let the fleet come near Iran’s territorial waters.”

Iran is ready and equipped enough to combat western propaganda on this issue, he highlighted.