TEHRAN (defapress)- Iraqi President Barham Ahmed Salih, in a meeting with Iranian Energy Minister Reza Ardakanian, called for the futher expansion of mutual cooperation with Iran in all areas, particularly electricity and water, saying that stronger ties will contribute to regional peace and stability.
News ID: 74616 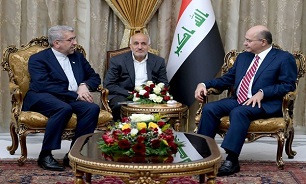 Barham Salih highlighted importance of Iraq-Iran cooperation in the field of energy, and said that expansion of ties in all areas, especially in energy and water, will upgrade mutual cooperation.

The Iraqi top official made the remarks in Baghdad on Thursday after the official signing of a Memorandum of Understanding (MoU) between the two countries.

Iraq's Minister of Electricity Luay Al Khateeb signed the MoU on behalf of the Iraqi government.

Elsewhere in his remarks, Salih said all countries of the region share a grave responsibility to broaden cooperation to stabilize the principle of peace in the region.

He said that neighbors shoulder a grave duty to promote the foundations of peace and stability in the region through serious talks and joint cooperation to build up more trust in line with interests of regional nations.

Ardakanian, in this meeting, for his part, said Iran is willing to expand cooperation with Iraq in all areas, especially in electricity, energy, and water.

Earlier on Wednesday, he announced Iran’s preparedness to participate in projects to reconstruct Iraq after the devastating war launched by the US and its allies against the country.

The Islamic Republic of Iran is ready to participate in reconstruction of Iraq, in particular, in infrastructural projects, Ardakanian told reporters upon arrival in the Iraqi capital city of Baghdad on Wednesday.

Meantime, Iraqi Electricity Minister Luay al-Khateeb called for the development of relations with Iran, saying that Iraq is interested in cooperation with all countries, in particular, Iran.

He referred to the growing population in Iraq, and noted that Baghdad is thirsty for energy as a pre-condition to its development.

In relevant remarks earlier this month, Iraqi Minister of Construction and Housing Bangen Rekani had voiced his country's interest in Iranian firms' partnership in that country's reconstruction and development projects.

"My country welcomes the presence and participation of Iranian companies for reconstruction of different regions in Iraq," Rekani said in a meeting with Hassan Danayeefar, an advisor to Iranian first vice-president for economic relations with Iraq.

During the meeting, the two sides touched on the latest status of bilateral relations and topics of mutual interest, including ways to arrange for the payments of Iranian companies.

Danayeefar, for his part, said that the Iranian firms are ready to cooperate in the reconstruction process of Iraq which is damaged by the war on ISIL terrorists.