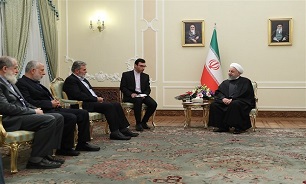 In a meeting with Secretary General of the Palestinian Islamic Jihad resistance movement Ziad al-Nakhala in Tehran on Tuesday evening, Rouhani reaffirmed Iran’s commitment to supporting the Palestinian nation, saying such backing has been in place since the 1979 Revolution, led by late Imam Khomeini.

Lauding the Palestinian nation for standing against the Zionist regime’ expropriation, injustice and occupation over the past 70 years, Rouhani underlined that the struggle should go on until the Israeli regime acknowledges the Palestinians’ rights.

“The Zionist regime, thanks to support from the new rulers of the White House, is seeking to assert control over the entire (Middle East) region; and Palestine is a part of such a complex plot,” Press TV quoted him as saying.

For his part, Nakhala briefed the Iranian president on the latest developments in Palestine and the capabilities of the resistance groups.

“Undoubtedly, the Islamic Republic of Iran’s support and principled policies have played a major role in thwarting attempts aimed at stripping the Palestinian nation of their rights,” Nakhala added.

He also stressed that that the Palestinian people will continue resistance against the Israeli regime to uphold their rights.

On Monday, Leader of the Islamic Revolution Ayatollah Seyed Ali Khamenei praised the Palestinian nation’s great victories against the Israeli regime in recent years, saying Palestinians could establish a government in Tel Aviv.

“You will win even greater victories by God’s grace,” Ayatollah Khamenei told Nakhala in Tehran on Monday.

The Leader also stressed that the heavy pressures from the arrogant powers will never discourage Iran from supporting Palestine on the basis of its divine, religious and rational duty.