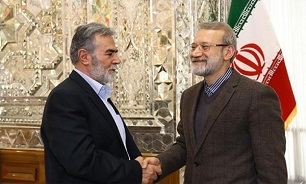 He made the above remark in his meeting with the Secretary General of the Palestinian Islamic Jihad Resistance Movement Ziad al-Nakhala in Tehran on Wed. and said, “supporting cause of Palestine will affect the security of the region significantly, so that Islamic Republic of Iran always back the resistance movement of Palestinian people.”

He pointed to the recent developments in Palestine and holding the March of Return by Palestinian people and added, “in the current situation, countering and restricting ‘axis of resistance’ is the main strategy followed up by the United States and Zionist regime, but drastic measures and initiatives taken by the Palestinian people in this regard will neutralize malicious objectives of the Zionist regime and US.”

There is no doubt that current developments in the regional scene move towards the victory of ‘axis of resistance’, Larijani reiterated.

For his part, Secretary General of the Palestinian Islamic Jihad resistance movement Ziad al-Nakhala hailed the unsparing and unflinching support of the Islamic Republic of Iran from the Palestinian people and resistance movement and added, “Islamic Republic of Iran supports Palestine at the condition that many Arab countries are normalizing their relations with the Zionist regime.”