TEHRAN (defapress)- Most American troops and veterans believe that the US wars in Iraq and Afghanistan have been going on for too long, a new poll revealed.
News ID: 74742 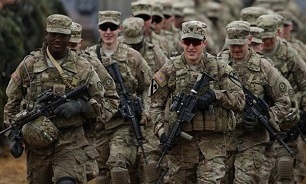 The survey by Smithsonian, released Wednesday, found that more than 80 percent of current and former US service members were fatigued by the two conflicts, years after former President George W. Bush started them, presstv reported.

This is significant because 83 percent of the participants in the poll said they still supported Washington’s so-called war on terror, which began after the September 11, 2001 attacks in New York City.

The United States invaded Iraq in 2003 under the pretext that former Iraqi dictator Saddam Hussein had weapons of mass destruction, an allegation later proven wrong.

Former US President Barack Obama announced in 2013 that he was pulling out all US troops from the Arab country. However, the US troops returned to Iraq a year later under the pretext of fighting the Daesh terrorist group.

It has been a more or less similar story with the US military campaign in Afghanistan, which has turned into the longest ever war in America’s history.

The US invaded the country in 2001 to allegedly eradicate the Taliban and other terror groups. After 17 years of deadly clashes, however, the Taliban remain in control of over half of Afghanistan while the Daesh (ISIL or ISIS) terror group has also gained a foothold in the country.

The wide-ranging poll also found that two-thirds of women in the US military had been sexually harassed or assaulted.

Around 66 percent of women partaking in the poll said they had experienced sexual harassment or assault while 68 percent said they had been subjected to gender discrimination in the military.

This is far higher than what had been revealed in previous polls.

For example, a Pentagon study in 2015 found that only around 27 percent of women had experienced sexual assault or harassment while doing military service.

The Pentagon said in a recent report that it had received over 5,000 reports of sexual harassment or assault in fiscal year 2017—around 10 percent more than the year before.

US military officials viewed the increase as a good sign, calling it “an indicator that Service members continue to gain confidence in the department’s sexual assault response system”.

In one of the worst sexual scandal cases within the US military, investigative reporters discovered a secret Facebook group in 2017 that was used by members of the US Marine Corps to share photos of nude servicewomen.