Enemies in Weak Position in Light of Iran’s Deterrence

TEHRAN (defapress) – Iran has enhanced its deterrent capabilities to such an extent that the enemies have found themselves in a position of weakness, Iranian Defense Minister Brigadier General Amir Hatami said.
News ID: 74798 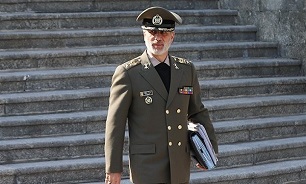 During a visit to academic centers affiliated with the Defense Ministry in Iran’s southern city of Shiraz on Sunday, General Hatami said the adversaries would not hesitate for a moment to attack Iran if they perceived that the country has become weak.

He added that Iran has made such great scientific and defense advances and acquired such a high level of deterrent power that the enemies of the Islamic Republic have been pushed to the position of weakness.

In comments in November 2018, Leader of the Islamic Revolution Ayatollah Seyed Ali Khamenei urged the Iranian Armed Forces to boost their military capabilities and preparedness in such a way that the enemies would not ever dare think of threaten the country.

Earlier in February, the Leader had announced, “Without a moment of hesitation, the country must move to acquire whatever is necessary for defense, even if the whole world is opposed to it.”

Ayatollah Khamenei has repeatedly stressed the need for strengthening the country’s military power and called on the Armed Forces to maintain a high level of preparedness.