TEHRAN (defapress)- Saeb Erekat, the Secretary General of the Executive Committee of the Palestine Liberation Organization (PLO), lambasted on Monday US National Security Advisor John Bolton for statements he made in Israel, accusing him of supporting occupation.
News ID: 74842 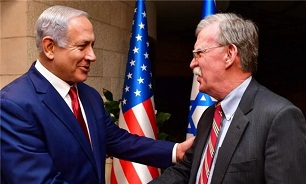 “This US Administration does not understand that the real issue here is not whether someone is pro-Israel or pro Palestine. It is weather you are pro peace or against it," he added.

"They made the choice of being against peace. Against those Palestinians and Israelis who aspire to achieve peace on the basis of two states (Israel and Palestine) living in peace and security side by side on the 1967 borders. They are on the wrong side of history and human civilized values. Self-defense is not occupation, collective punishment, murdering medics, and disabled people, demolishing of homes, siege, ethnic cleansing, and apartheid. It is defined as war crimes in accordance with international law," Erekat stressed.

Bolton arrived in Israel on Sunday to reassure it of US commitment to Israel's security after its withdrawal from Syria. The visit also included a tour for Bolton with Israeli officials of the Old City of occupied Jerusalem, which Erekat had also lambasted as a gross violation of international law and United Nations resolutions.