TEHRAN(defapress)– Iran’s message to neighboring countries has always been friendship and peace but enemies will face crushing and disappointing response if make any mistake, Deputy Commander of the Islamic Republic Army for Coordination Affairs said.
News ID: 74913 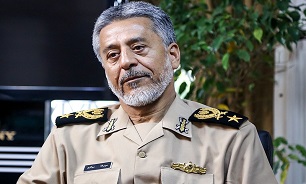 Rear Admiral Habibollah Sayyari made the remarks on Friday while addressing the Iranian air force drills in Isfahan.

Various operations, including shooting bomb, Mortar shell, missile and air combat operations, have been conducted in Isfahan drills, he added.

The aircraft have been made by Iranian armed forces and universities, he noted.

Referring to the fact that all pilots are trained inside the country, Sayyari said, ‘HESA Saeqeh’ aircraft have successfully bombarded the targets.

The HESA Saeqeh, alternatively spelt Sa'eqeh; Saegheh, or Saeqeh-80, is an Iranian built single-seat jet fighter, derived from the American Northrop F-5. A joint product of the Islamic Republic of Iran Air Force and the Iranian Ministry of Defence, it is the second generation of the Iranian Azarakhsh fighter.