US Decision Making for EU Unacceptable

TEHRAN (defapress)- High Representative of the European Union for Foreign Affairs and Security Policy Federica Mogherini said the US as the closest ally of the European Union (EU) is not allowed to dictate to the bloc, reassuring that the EU will spare no efforts to protect legitimate trade with Iran.
News ID: 74930 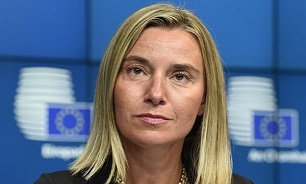 Mogherini said that the United States cannot impose its policies on the 28-nation bloc's "legitimate trade" relations with Iran.

"We Europeans cannot accept that a foreign power – even our closest friend and ally – makes decisions over our legitimate trade with another country," she said in an interview with the European Council on Foreign Relations published on Friday.

She added that the EU is working with the rest of the international community to keep alive the landmark nuclear agreement, officially known as the Joint Comprehensive Plan of Action (JCPOA), despite the US unilateral move to pull out from the deal.

The Iran nuclear deal "has so far been implemented in full, as certified by the International Atomic Energy Agency in 13 consecutive reports," she said.

Mogherini further rejected claims that Europe is motivated mainly by economic or trade considerations and said all efforts by the EU to preserve the JCPOA have been made "because of our collective security”.

"That is not the case: we do this to prevent a nuclear non-proliferation agreement that is working from being dismantled, and to prevent a major security crisis in the Middle East," the senior EU official pointed out.

She emphasized that the EU should guarantee that firms seeking to do legitimate business with Iran are allowed to do so.

"This is what we are working on right now: tools that will assist, protect, and reassure economic actors pursuing legitimate business with Iran. It is true that this situation has triggered a conversation on European economic sovereignty," Mogherini said.

Earlier on Wednesday, Supreme Leader of the Islamic Revolution Ayatollah Seyed Ali Khamenei underlined that Iran does not trust the US and even Europe's promises and will firmly stand against their bullying.

"Do not retreat against the US and Europe's threats, bullying and prates and stand against them and know that neither their threats nor their promises and even signatures are creditable," Ayatollah Khamenei said, addressing Iranian officials.

He made the remarks in a meeting with a large number of people from the Central province of Qom in Tehran on Wednesday.

Ayatollah Khamenei said that some of the US statesmen pretend that they are insane "but I do not agree with that as they are actually number-one idiots".

He added that the US officials thought that they could annihilate the Islamic Republic in less than 6 months by the sanctions imposed against the country after the Islamic Revolution, but the Revolution has now turned 40 despite all their pressures.

Ayatollah Khamenei referred to the arrogant powers' Iranophobia, Islamophobia and Shiitephobia plots implemented in the world and the region, and said, "Nations are not hostile to Islamic Iran in their essence, and they support Iran as soon as realities appear."

He said that the US is angry with Iran for losing a rich source for plundering after the Islamic Revolution (1979), and added, "They themselves say that Iran is the fifth richest country of the world given its extraordinary capacities and it is natural that they are deeply angry at losing such a wealth."

"We support the movement in government's diplomacy, …we believe the US administration is untrustworthy, conceited, illogical and unfaithful to its pledges," Ayatollah Khamenei said, addressing cadets graduation ceremony here in Tehran at the time.

He reiterated his confidence in the Iranian officials, yet, he advised them "to take their steps strongly, but carefully and after thorough study", underlining that the country's officials should always have national interests, Islamic Republic's exalted causes and national honor in mind.