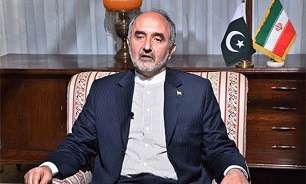 "Tehran and Islamabad through their close cooperation are moving forward to bring peace to the region, specially their neighboring Afghanistan," Honardoust said on Friday.

The Iranian ambassador reiterated that Iran and Pakistan as two important countries of the region can play a vital role for regional peace and stability.

"Iran is the most important country in resolving the regional crises, specially Afghanistan. The problem in Afghanistan and other regional states can be resolved through cooperation with the neighboring states, specially Iran, while the US is in no position," Rabbani Khar told reporters in a press conference in Lahore city.

"Iran, Afghanistan and China are the most important countries for Pakistan and therefore, Islamabad should think of revising its relations with these countries before establishing ties with Washington," she added.

Iranian officials have confirmed the talks, but meantime, stressed that negotiations with the Afghan group did not mean shared views or stances.

"A delegation from the Taliban was in Tehran yesterday and extensive talks were held at the foreign ministry with Deputy Foreign Minister for Political Affairs (Seyed Abbas) Araqchi," Foreign Ministry Spokesman Bahram Qassemi said on December 30.