TEHRAN (defapress)- The Turkish government has granted hundreds of identification cards to the residents of Afrin in a bid to pave the way for annexation of the region in Northwestern Aleppo to Turkey, media sources said.
News ID: 75282 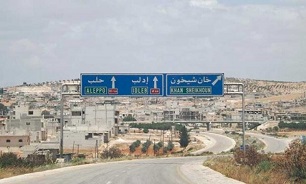 The Kurdish-language Hawar News pointed to Ankara's efforts to occupy Northern Syria, and said the Turkish occupiers have so far issued over 2,000 ID cards for citizens of Afrin.

The local sources in Afrin also pointed to the continuation of Ankara-backed militants' measures against civilians, and said that the militants have asked for a ransom of over $10,000 for releasing a physician they have abducted from Afrin region.

Meantime, the Ankara-backed militants have also plundered olive products worth over $100 million.

In a relevant development earlier this month, a number of the Ankara-backed militants were killed and wounded in a military raid by the Kurdish forces in Afrin.

The Kurdish fighters during their military operations against the Turkish Army and its affiliated militants in Afrin region pounded the Turkey-backed militants' positions and movements in the village of Khaleteh in Afrin region, killing at least eight militants of Sultan Murat and Jbahat al-Shamia as well as wounding three others, the Kurdish media Hawar News reported.

It noted that the Kurdish fighters' raid on the military positions of Farqa al-Hamza in the village of Kimar in Shirawa region killed four terrorists, including a terrorist commander and wounded three others.

The Kurdish militants also exploded a bomb in the command center of Faylaq al-Rahman terrorist group and the military police affiliated to Ankara in Marimin village in Shara region, killing four terrorists and wounding two others.

Several other Ankara-backed terrorists were also killed and wounded during the Kurdish fighters' military operations in Shara region.

In a relevant development also earlier this month, the Kurdish fighters during their military operations against the Turkish Army and its affiliated militants in Afrin pounded a military position of Ahrar al-Sham terrorists and Turkish army troops in Jandariseh region of Afrin, severely wounding two Turkish Army soldiers and five Ankara-backed militants, Hawar News reported.

It noted that five members of Farqa al-Hamza and Jbahat al-Shamia were killed and three others were wounded in three consecutive military operations by the Kurdish forces against the Turkish Army and Ankara-backed militants in the Center of Afrin as well as Shirawa and Shara regions in recent days.

Meantime, battlefield sources in Northern Aleppo reported that during the Syrian Democratic Forces' missile attack on a military position of the Free Syrian Army (FSA) in Kimar village in Afrin region, a terrorist was killed and five others were wounded.

Also, the Turkish Army and its affiliated militants launched mortar and tank attacks on Soqankeh village from Kimar village.