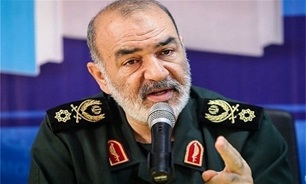 Noting that Iran develops its missile capabilities based on defensive strategies, General Salami said late Saturday that maintaining a cap on missiles’ range is not due to technological limits, but based on the country’s strategic approaches.

Salami underlined that Iran’s missile power is unstoppable and no one can pressure the Islamic Republic on its defensive programs.

However, the commander warned that if Western powers seek to limit Iran’s missile power, Tehran will have no option but to expand its potentials in the strategic field.

He stressed that if the Europeans and others want to pursue the missile disarmament of the Islamic Republic, there will remain no option but to resort to a “strategic leap”.

Earlier on Saturday, Iran unveiled ‘Hoveizeh’ long-range cruise missile. Designed and manufactured by the Aerospace Industries Organization, Hoveizeh has a range of over 1,350 kilometers that is designed to be used against ground targets.

General Salami also referred to the Israeli regime’s warmongering in the region, saying that if the Zionist regime tries to wage a war, it will certainly lead to Israel's own elimination.

Earlier this week, he said that the Israeli regime struggles to disturb the strategic balance and compensate for its psychological fears by carrying out tactical operations and attacking several ammunition depots in Syria.

“We tell them not to play with fire; since they are not even comparable to our Operation Beit ol-Moqaddas. And they will be wiped off before the US could help them,” Salami said.

Operation Beit ol-Moqaddas was a successful operation carried out by Iranian forces during holy defense years in 1982 to liberate Khorramshahr and push Iraqis to the border.