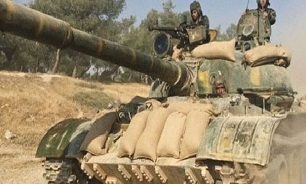 SANA reporter said that the strikes resulted in the killing and the injury of many terrorists and the destruction of a weapons’ depot and dens and positions were used by Jabhat al-Nusra terrorists in planning for their terrorist operations.

Armored cars and vehicles belonging to Jabhat al-Nusra terrorists were destroyed in the outskirts of al-Habbit town in Idlib southern countryside.

The reporter added that army units also launched intensive operations on outskirts of al-Hwash and al-Hawija in Hama northern countryside in response to targeting with sniper fire the safe towns and army points in the area by terrorists of “Turkistan Party”.

In the western outskirts of Hasraya town, the army units responded with intensive strikes to breaches of terrorists of “al-Ezza Brigades”, killing and wounding many of them.

On Saturday, army units carried out special operations against dens and movements of the “Turkstani Party” terrorists in al-Sarmaniya village in Hama northwestern countryside in response to their attacks and breach of the de-escalation zone agreement.