US Will Sell out Those Who Put Trust in It

TEHRAN (defapress)- Syrian President Bashar al-Assad has implicitly warned the so-called Syrian Democratic Forces (SDF) against reliance on the United States, saying Washington would not protect those who depend on it.
News ID: 75693 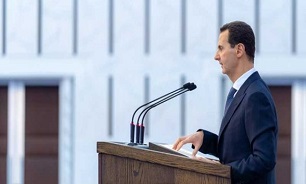 “We say to those groups who are betting on the Americans, the Americans will not protect you. The Americans will put you in their pockets so you can be tools in the barter, and they have started with it,” Assad said in a meeting with the heads of local councils in the capital Damascus on Monday, without naming those US-sponsored groups, presstv reported.

“Nobody will protect you except your state. If you do not prepare yourselves to defend your country, you will be nothing but slaves," he added.

US forces have long supplied arms and training to the SDF, and used the predominantly Kurdish militants as their main partner in the purported fight against the Takfiri Daesh terrorist group.

Turkey has been threatening for months to launch an offensive in Northern Syria against Washington-backed People's Protection Units (YPG), which forms the backbone of the SDF. Ankara considers the YPG a terrorist organization and an extension of the outlawed Kurdistan Workers’ Party (PKK), which has been fighting for an autonomous region inside Turkey since 1984.

Elsewhere in his remarks, Assad further noted that support for terrorism plus attempts to undermine the Damascus government’s sovereignty form the core policies of some states vis-à-vis Syria.

He went on to say that the United States and its allies will not give up plotting to partition Syria, but rather want to break up the entire Middle East region.

“The US scheme to impose hegemony on every corner of world has not changed at all, but the fact is that our people [Syrian nation] have mounted stiffer resistance," the Syria's president noted.

“After all these years of crisis, mercenaries and agents have not realized that nothing can maintain their value expect for their own essence. The only way to get rid of misguidance is to join the reconciliation process and to hand over your munitions to Syrian government forces,” Assad emphasized.

The Syrian president added that his country has managed to score major victories over terrorist groups, thanks to the enormous scarifies made by government troops and the solid support offered by its allies.

“It couldn’t have been possible to protect our homeland without a unified front and contribution of people from different strata of the Syrian society. Syrian people have a deep-rooted history and they have resisted terrorism… We can achieve the final victory with each other not over each other,” Assad underlined.

He said the Damascus government is doing its utmost for the return of displaced people to their homes and an end to their sufferings.

“We will not allow the sponsors of terrorism to transform Syrian refugees into a political tool to achieve their goals,” he stated.

“We are currently at war on multiple fronts: The first front is a military one; the second is the blockade, the third is through cyberspace and the final is the one being carried out by corrupt people,” the Syrian president underscored.

Assad stressed that the current situation in Syria demands greater discretion, saying, “Having failed in generous support for their agents and proxies, enemies have now turned to attempts to create chaos inside the Syrian society.”

The Syrian president said the future of Syria must be independently decided by its people.

“We will not allow hostile states to achieve any of their objectives through their agents, who hold the Syrian nationality. Hostile countries are still insisting on their aggression and obstruction of all viable processes, namely the Astana talks and relevant consultations,” he commented.

He added that Damascus welcomes any UN role that is within the framework of the world body’s Charter.