TEHRAN (defapress)- Russian Deputy Foreign Minister Sergei Vershinin said at the Munich Security Conference on Sunday that Syria's Kurds should start a dialogue with President Bashar al-Assad as their military allies, the United States, is preparing to withdraw from the Arab country.
News ID: 75698 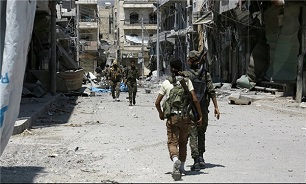 “If there are no foreign troops on the ground of Syria’s Northeastern part, I think that the best solution would be to start up a dialog between the Kurds and Damascus,” Vershinin said, adding, “We support this dialog between Damascus and the Kurds”, Middle East News reported.

“The Kurds are a part of the population of Syria,” Vershinin further stated, noting that “we know about the problems between Damascus and the Kurds but I think there is a solution through dialog”.

Most of the Kurdish militants in Northern Syria are members of the People’s Protection Units (YPG), a US-backed militant group that forms the backbone of the so-called Syrian Democratic Forces (SDF).

US President Donald Trump said abruptly in December last year that a full withdrawal of all the 2,000 US troops in the Arab country would happen soon. With the planned withdrawal of Washington, the Kurds would be exposed to possible Turkish military action as Ankara regards the YPG as an extension of the outlawed Kurdistan Workers’ Party (PKK) in Turkey.

The prospect of a new conflict involving Turkey and the Kurds now looms ever larger over the horizon as Daesh’s territory has also significantly withered.

Syrian Kurds have as recently as January shown willingness to work with Damascus.