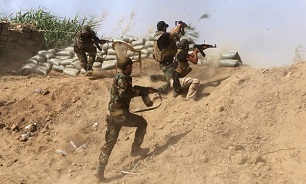 He underlined that the Iraqi security forces' control over all penetration holes from Syria to Iraqi territories has taken place concurrent with Syrian Democratic Forces (SDF) military operation against the ISIL.

In a relevant development on Wednesday, several ISIL terrorists and their family members were moved out of the Eastern Euphrates region on more than 50 trucks of the US-led coalition after a secret agreement between the two sides.

The London-based Syrian Observatory for Human Rights (SOHR) reported that over 50 covered trucks carrying ISIL militants and their family members left the farms between Baqouz region and the Eastern banks of the Euphrates.

It added that the trucks had entered the region in line with the secret agreement between the US-led coalition and the ISIL, noting that the fate of those ISIL militants who have rejected the agreement is not clear yet.

Meantime, the SOHR had reported on Tuesday that the US-led coalition had sent a large number of trucks to Eastern Syria to transfer the ISIL terrorists from Deir Ezzur province after reaching an agreement with the militants, media reports said.

"Some 50 to 60 US trucks arrived in farms located between al-Baghouz and banks of Eastern Euphrates in Eastern Deir Ezzur to relocate the terrorists from the region," the report said.

It noted that the arrival of the trucks had taken place in line with taking out the remnants of the ISIL and their families after a covert agreement was reached between the US Army troops and the ISIL terrorists in the region.

The US-led coalition forces are also expected to officially announced the end of the ISIL in the last area under their control in Eastern Euphrates.

The United States has sent tens of trucks with suspicious cargoes from Northern Iraq to Eastern Syria as reports say Washington and its allied militants are readying to declare the end of the ISIL's presence in Eastern Euphrates territories, media reports said.