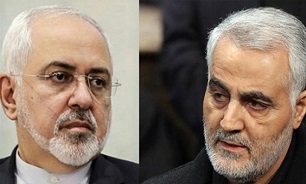 In remarks released on Wednesday, Major General Qassem Soleimani pointed to reasons behind Zarif’s recent move to announce his resignation and said in the recent trip of Syrian President Bashar al-Assad to Tehran and his meeting with President Hassan Rouhani, “some lack of coordination” by the presidential office has led to Zarif’s absence from the meeting, which was followed by the minister’s complaint.

“Evidence shows that there was no purpose behind Mr. Zarif's absence at this meeting, and I should emphasize that he is the main person in charge of the Islamic Republic of Iran’s foreign policy as the Foreign Minister,” the commander stressed.

“Mr. Zarif should be responsible for the foreign policy of the Islamic Republic of Iran and during his tenure in the Ministry of Foreign Affairs of the country, he has always been supported and approved by senior officials of the Establishment, especially the Leader,” Major General Soleimani stated.

“Many thanks for the generosity of the dear and brave people of Iran and its authorities over the past 67 months. I sincerely apologize for the inability to continue serving and for all the shortcomings during my service. Be happy and worthy,” Zarif wrote on his Instagram page.

The Iranian president's chief of staff, Mahmoud Vaezi, on Tuesday rejected media reports that the president has accepted Zarif’s resignation.

Chairman of the Parliament’s National Security and Foreign Policy Commission Heshmatollah Falahat Pishe has also told Tasnim, “We are still unaware whether or not the president has accepted Mr. Zarif’s resignation.”

More than 150 Iranian lawmakers on Tuesday asked Rouhani to turn down the foreign minister’s resignation.

In a letter on Tuesday, the parliamentarians have asked the president to encourage Zarif to remain in his post.

Born in 1960, Zarif lived in the United States from the age of 17 as a student in San Francisco and Denver, and subsequently as a diplomat to the United Nations in New York, where he served as Iranian ambassador from 2002 to 2007.

He was appointed minister of foreign affairs in August 2013 after Rouhani won the presidency.