TEHRAN (defapress)- Iranian Ambassador to Russia Mehdi Sanayee and Russian Deputy Foreign Minister Mikhail Bogdanov in a meeting in Moscow on Friday discussed mutual cooperation and the latest developments of the Middle East, specialty in Syria and Iraq.
News ID: 75912 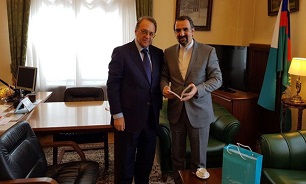 During the meeting in the Russian capital today, Sanayee and Bogdanov exchanged views on different range of issues such as the ongoing developments of Syria and Iraq as well as Russia's initiative in area of collective security of the Persian Gulf.

The two sides also blasted the US for its unconstructive role in the normalization of relations between Arab countries and Syria.

In a relevant development last week, Iran and Russia pledged to vehemently prevent cross-regional countries from creating new crises in the region, highlighting that strong bilateral ties will secure the national interests of both sides.

Chairman of the Iranian Parliament's National Security and Foreign Policy Commission Heshmatollah Falahatpisheh and Russian Ambassador to Tehran Levan Jagarian in a meeting in Iranian capital city voiced their countries' determination to jointly stop new tensions in the region instigated by trans-regional players.

Falahatpisheh said in the meeting that relations between Iran and Russia are developing in a good way in areas of regional, international and bilateral cooperation, highlighting that cemented interactions and relations between the two countries will greatly contribute to the national interests of both sides.

“The US-backed terrorists, funded by reactionary Arabs, are endeavoring to spread insecurity in the region, in a bid to secure the US’ interests,” said the Iranian lawmaker, condemning the recent terrorist attack on a bus carrying the Islamic Revolution Guardians Corps (IRGC) members in the Southeastern province of Sistan and Baluchistan on Wednesday.

He then blamed Islamabad for lack of control over its international borders that has resulted in sporadic targetting of Iran by terrorists sheltered on Pakistani soil.

“The Islamic Republic of Iran has demonstrated several times that it enjoys the full competence to counter security threats in areas beyond its borders,” he underlined.

Jagarian, in this meeting for his part, condemned the perpetrators of the terrorist attack on the IRGC bus in Sistan and Baluchistan province, offering sympathies to the Iranian, government, Parliament, and nation, particularly the bereaved families.

He also hailed the growing status of Iran-Russia relations, underling that Moscow favors and supports the expansion of friendly ties with Tehran in all areas.

Late in last month, Advisor to the Iranian Parliament Speaker Hossein Amir Abdollahian met with Jagarian in Tehran where the two exchanged views on the latest regional developments in Syria.

During the meeting, Amir Abdollahian condemned Tel Aviv’s aggression against Syria as a strongly provocative move, and warned that Israel will lose the most if any new war breaks out in the region.

The military and provocative moves of the Zionist regime which is violating the airspace of Syria are making up the main threats to security in the region,” he added.

The Iranian former deputy foreign minister described the Iran-Russia cooperation in Syria as a successful experience which helped Syria and contributed to regional security.

The Iranian official underlined that if any war breaks out in the region, Israel will be the main loser.

Amir Abdollahian then touched upon the formation of the High Joint Parliamentary Commission of Iran and Russia, and described it as another successful case of cooperation between Tehran and Moscow.

“Parliamentary cooperation plays a very important role in resolving some issues and easing relations between state and private sectors of the two countries,” he further added.

For his part in the meeting, Jagarian said that Iran and Russia share a lot of commonalities in stances and approaches in different areas, calling for preservation of the high level of relations between the two sides.

“Russia welcomes expansion and development of cooperation and consultations on diverse area of shared interests with Iran,” the Russian diplomat highlighted.

The two sides also exchanged views on recent developments in the region, shared concerns, and bilateral issues in parliamentary cooperation.

Sanayee described the development of Iran-Russia political and security relations after signing of the Joint Comprehensive Plan of Action (JCPOA) as unparalleled, adding that the bilateral ties have yet to use all the potentials to further develop.

He made the remarks in a panel at the Institute for Iran-Eurasia Studies (IRAS) in Tehran.

At the panel, Sanayee first addressed the latest status of relations between Iran and Russia in political, economic and cultural fields, saying relations between the two countries have undergone a major transformation as a result of the growth of mutual needs and regional conditions.

According to Sanayee, since the signing of the 2015 nuclear deal also known as the JCPOA, economic relations between Iran and Russia have multiplied, but the developing relations have yet to reach the desired levels using potentials.

The two countries' common approaches and perspectives towards global trends and shared regional interests, specially in relation to the Middle East developments, were the most important force behind the development of political relations between the two countries, according to the Iranian ambassador.

During the meeting, both sides voiced hope that level of bilateral relations would be further increased in the said areas.

Russia’s ties with Central Asian and Caucasus states and prospects of bilateral relations in various fields were among the other topics discussed during the meeting.

Iran and Russia have established strong relations on areas of security, counter-terrorism, and defense in the past couple of years.

In a related front on December 24, a delegation of the Russian defense ministry led by General Osipov arrived in Iran to take part in a second session of the Russian-Iranian working group for the implementation of a mutual agreement on military cooperation.

The agreement was signed in January 2015. It was inked by Russian Defense Minister Sergey Shoigu and his then Iranian counterpart General Hossein Dehqan.

The Russian minister said back then that the agreement had laid "the theoretical groundwork for military cooperation".

In relevant remarks on December 25, Chief of Staff of the Iranian Armed Forces Major General Mohammad Hossein Baqeri underlined the need for Tehran and Moscow to further increase their military cooperation, adding that both countries were determined to confront existing threats.

"Success of the two countries' Armed Forces in the process of confronting terrorism in Syria and the failure of Takfiri terrorists and their supporters in the region indicates Iran and Russia's will and capacities to confront the existing threats," General Baqeri said in a meeting with General Osipov in Tehran.

"The geopolitical and geostrategic capacities of Iran and Russia necessitate the two countries' Armed Forces to devise and develop fields of cooperation through a long-term view, and manage and plan for them within the framework of the agreements made by the joint military commission," he added.

During the meeting, General Osipov referred to the age-old relations between Iran and Russia, and stressed the abundant areas and capacities existing for mutual cooperation.