TEHRAN (defapress) – A leader of Palestine’s Islamic Jihad Movement said the weekly protests of the Palestinian people dubbed “the Great March of Return” will continue until the Israeli blockade on the Gaza Strip is lifted and all Palestinians can return to the occupied territories.
News ID: 75928 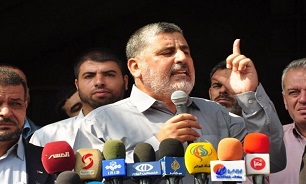 Ahmad al-Mudallal told the Arabic-language Palestine al-Yawm that the Great March of Return protests along the Gaza border will continue until all demands of Palestinians are realized and the blockade on the coastal enclave is lifted.

He further said naming the 49th round of the protests as “the Friday of Bab al-Rahma” indicates that the battle for Quds is a battle for all Palestinians and Al-Aqsa's Bab al-Rahma is part of their religious beliefs, about which they cannot make a concession.

"Our message to our people in the occupied Quds on the Friday of Bab al-Rahma is that your battle is our battle and your blood is our blood…, and our weapons will never be laid down as long as Quds is occupied," the Islamic Jihad leader stated.

A day after UN investigators issued a report indicating that Israeli forces were committing war crimes in their violent repression of protests in Gaza, Palestinians once again demonstrated in the besieged coastal enclave on Friday as part of the Great March of Return.

According to the Gaza Ministry of Health, Israeli forces shot and wounded at least 17 demonstrators with live bullets as of 5:45 pm local time (3:45 pm GMT).

Three paramedics and a journalist were also reportedly hit by tear gas canisters in the lower limbs.

An ambulance was also reportedly targeted with tear gas, causing another three paramedics to suffer from excessive tear gas inhalation, the ministry said.

The report handed to the UN High Commissioner for Human Rights on Thursday said Israeli forces have used excessive force against Palestinian demonstrators participating in the Great March of Return in the past 11 months.

"Israeli security forces killed and maimed Palestinian demonstrators who did not pose an imminent threat of death or serious injury to others when they were shot, nor were they directly participating in hostilities," the panel report said.

The Israeli Ministry of Foreign Affairs dismissed the report on Thursday, saying Israeli forces only used “restrained action” and that the UNHRC was “an accomplice of a terrorist organization”, referring to the Palestinian resistance movement Hamas.