US Fails in All Plots against Iraq

TEHRAN (defapress)- Spokesman of Iraq's al-Nujaba Movement Seyed Hashim al-Mousavi downplayed the US sanctions against the resistance group, stressing that Washington's plots in Iraq have been thwarted.
News ID: 76088 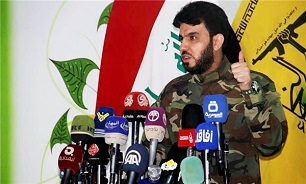 "The US is exerting political, economic and military pressure on the resistance front but they have failed so far," al-Mousavi told reporters in a press conference at FNA in Tehran on Saturday.

He underlined that the resistance groups will not retreat in confrontation against any foreign troops planning to violate the country's sovereignty. "History will record how we forced the US to retreat and defeated it."

Al-Mousavi said that US President Donald Trump's secret visit to Iraq indicated that Washington has been defeated in Iraq, adding, "The US has failed to materialize any of its occupying goals in Iraq."

The Al-Nujaba Movement had also earlier announced that it would double its efforts to stand against Washington's plots in the region after it was designated by the US State Department as a terrorist group.

"We in the Islamic Resistance are proud that we are always standing in the forefront of confronting the American terrorism against the oppressed nations," Deputy Secretary-General of al-Nujaba Movement Nasr al-Shamri told the Arabic-language Baghdad al-Youm.

"We are the ones who confront the terrorists and destructive occupation of Iraq and their (the Americans') al-Qaeda and ISIL terrorism," he added.

Al-Shamri underlined that al-Nujaba would confront all US plots in the region, adding that the State Department move would strengthen their determination to insist on their position.

The US added al-Nujaba Movement and its leader Akram Abbas al-Ka'abi, to its sanctions list, the State Department said.

"The Department of State has designated the Iranian proxy group Harakat al-Nujaba (HAN) and its leader, Akram 'Abbas al-Kabi, as Specially Designated Global Terrorists under Executive Order 13224," the State Department said in a statement last Tuesday.

Harakat al-Nujaba is an Iraqi Shiite resistance group that helped the Iraqi government liberate territory captured by the ISIL. It has also deployed forces to Syria to help the Syrian army recapture territories from terrorist groups.